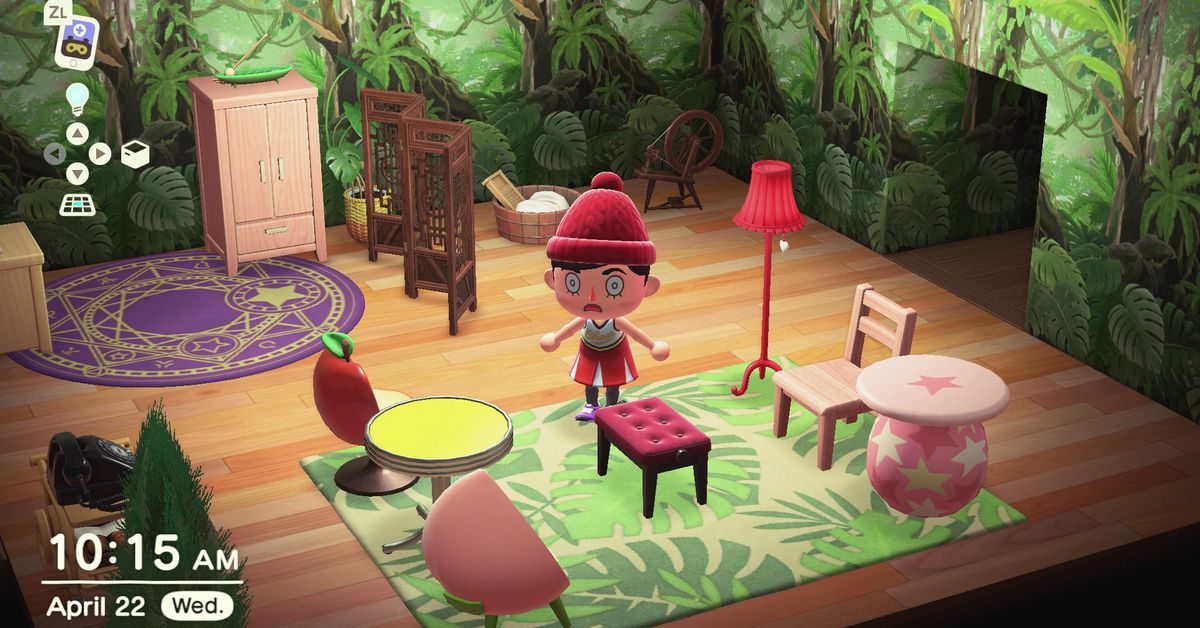 Having a beautiful house in Animal Crossing: New Horizons is the dream. Every day I see pictures of other players’ homes, and I admire their wild furniture choices and elaborate rooms. How can I get on that level?

I reached out to Diana Budds, who has written about interior design for many publications, most recently our sister site Curbed, where she’s a senior story producer.

Check out the video above, where I give Diana a tour of my home on the island of CUBA 2 and we redesign my home together. Diana confirmed what I suspected: that real-life interior design tips can inform how to lay out a New Horizons home to maximize comfort and snazziness.

Don’t put everything against the wall

Our instinct might tell us to put large furniture against walls to maximize floor space, but that doesn’t actually make your home feel bigger.

“If you’re standing in the middle of a room and everything is against the wall, you kind of feel like you’re surveying everything around you,” Diana says. “But if you bump things out and can create a space within a space, it cocoons you and makes you feel a little bit more comfortable.”

So try floating furniture out from the wall — whether that means putting a couch in the middle of the floor, or angling a screen perpendicular to the wall. Bumping furniture out like this can help with our next tip.

Zones are little vignettes of furniture that help break up the space in your room.

Even when you max out your New Horizons home and get multiple rooms, this is still a useful way to make the space feel cozy rather than cramped. It’s a philosophy that you might be familiar with if you’ve ever had to decorate a studio apartment.

Using Diana’s advice about bumping furniture out from the walls can make zones stronger. To use the couch as an example again, floating the couch away from the wall makes it clearer where the living room zone begins and ends.

Don’t be afraid of big rugs

Rugs are another strategic way to define zones in your house.

“The TLDR version is I think people often have rugs that are way too small for their spaces,” Diana says.

A fast-and-loose rule of rug sizing is that it should cover the entire zone you’re furnishing. That’s why, even if I have a small room, a small rug isn’t the best choice. Diana says that a room looks more organized if the rug is the proportional to the furniture.

Check out the video above to see how god-awful my living room looks when I use a rug that is simply too small. But when I cover the entire footprint of the zone, everything looks much neater, even though I haven’t swapped out any furniture.

Don’t be afraid of bold patterns

Let’s get one thing clear: I’ve covered my walls in a vibrant jungle wallpaper. And it rules. Some people say big patterns make a space look overwhelming, but that’s not necessarily true.

Of my majestic jungle wall, Diana says, “It makes your space feel a lot bigger since it’s an image that has some distance in it, and it kind of makes it feel like you’re in this very serene jungle.”

When it comes to pattern and color mixing, it’s hard to follow traditional rules in New Horizons. Let’s face it, in real life I could probably not afford to wallpaper my entire living room in jungle wallpaper. Nor could I test it out just to see if it matched my stuff. New Horizons lets you experiment with floors and wallpapers and custom furniture that you could never try in real life, so I say go wild here.

“Having lots of small things in a space can make it feel really cluttered,” Diana says. “Whereas if you have one larger piece that can achieve a similar function, it can sometimes make it feel much more spacious.”

She points to The Little Book of Living Small, by Curbed contributor Laura Fenton.

“For this family, instead of using lots of dining chairs around their table, they used a bench and that was a way that they were able to mix up the size of the furniture.” The bench allowed multiple people to sit at the table, but made the space less visually cluttered.

The “make it big” recommendation applies to vertical space too — if you have shelves that reach the ceiling, it actually makes your room look taller.

(Fortunately this isn’t a problem in Animal Crossing. Those bad boys are high.)

This is a hard one for me, in Animal Crossing and in Reality, because I have so much stuff I want to show off. But filling every available surface with cool stuff does make a room look packed.

One of the benefits of New Horizons is that technically, the entire island is your storage. So don’t try to display all your stuff all the time. The trick is to be intentional, and think about what you really want from the room. A solution to this might be to swap out decorative fossils on a daily basis, or when guests come over.

Wall space is also great, and in New Horizons items like fancy outfits can be hung on walls. In my home, I used wall lights instead of floor or table lamps to save surface space.

Do what makes you happy

In my Animal Crossing: New Horizons home, that means making my space feel like a steamy jungle. Lean in!

I might never be able to live inside a dark steamy jungle home in real life, but Animal Crossing lets us go hog wild with our dreams. I hope these tips help you follow your dreams, too — and maybe impress that Tinder date.

Don’t forget to subscribe to Polygon on YouTube for more. If you haven’t yet, check out our video about Animalese, the language of Animal Crossing — and learn why it’s dubbed into English.

Vox Media has affiliate partnerships. These do not influence editorial content, though Vox Media may earn commissions for products purchased via affiliate links. For more information, see our ethics policy.