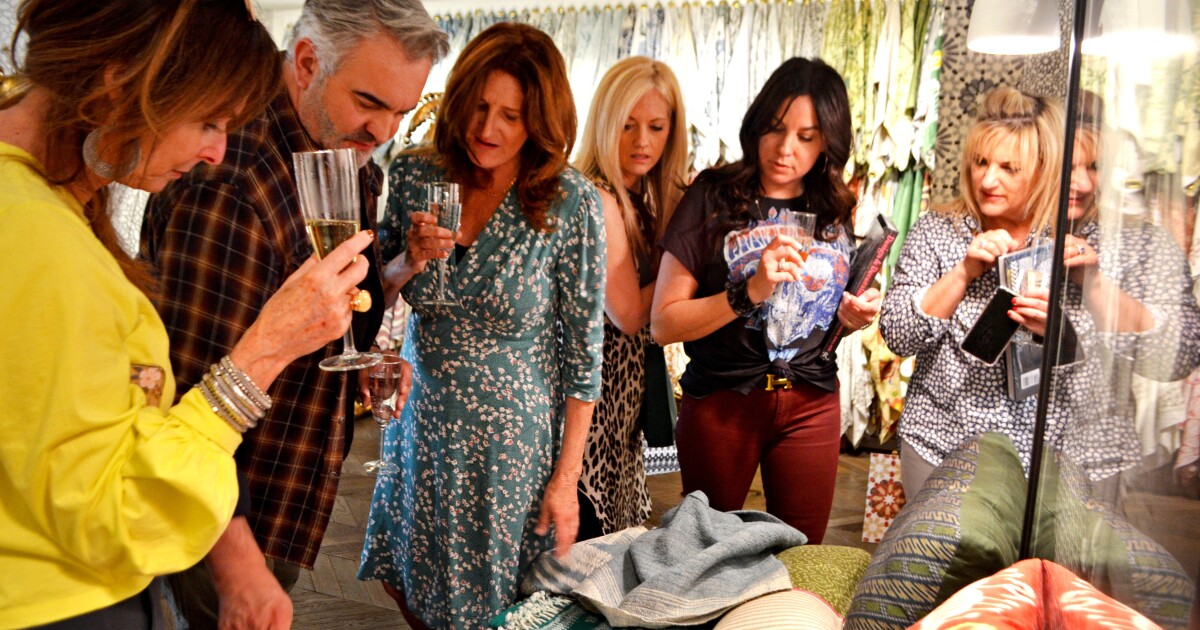 Kathryn Ireland’s cozy, bohemian aesthetic may seem effortlessly curated — accessible, easygoing and affable, like the designer herself. But a stint on her most recent interior design retreat (or boot camp, depending on your outlook and intention) unveils the 30 years of nurtured relationships, tailored creative instincts and astute business prowess it took to become Kathryn Ireland.

Over one weekend before the coronavirus stay-at-home orders, seven eager participants (and me, a fly on the wall) experienced Ireland’s favorite places to shop in Los Angeles, an insider’s scoop on tricks of the trade and a rare glimpse of her at work (and off the clock).

Six of the women were friends from Tallahassee, Fla., while the other was from L.A.; only three were actual interior designers. One of those, Floridian Elizabeth Fearington Diehl, said she came “because I like to see new vendors, resources and places to tap into for unique things. The only way you find that stuff is by traveling.”

“I like working with people that I know, are responsive and stand behind what they do,” she said. “They’ll go out of their way to help you.”

For Ireland, whose career includes six books, a TV show and a catalog of celebrity clients that extends to Steve Martin and Julia Louis-Dreyfus, it’s all about the service and good relationships with design dealers. Access to such connections, secured by a career of nurturing and loyalty, is perhaps the biggest prize for weekend campers.

“Because I brought them here,” Ireland said, “people will extend the same courtesy that they give to me.”

The next stop was Lief, a sprawling warehouse filled with vintage and outdoor furniture, wallpaper, squawking cockatiels in a large cage and antiques, including a pair of $37,000 gold-embellished mirrors from a 1700s castle that Diehl was eyeing for a client.

The group’s non-Floridian was L.A. local Heather Bath, a volunteer at her kid’s private school and a longtime Ireland fan. She was also the lone participant who came ready to work.

“I have a whole notebook I put together and I walked in and all the gals were like, ‘You have a notebook?’ I thought I needed to come prepared,” said Bath, who’s remodeling her home and met the designer by chance at a farmers market.

During a 1½-hour design marathon, Ireland and Bath turned simple plans for an unfinished decorating job into a two-phase project of repainting, removing walls, adding a basketball court and turning the narrow, cloistered entrance of her house into a “great square.”

“There aren’t any stores like this in Tallahassee,” said Darcy Cavell, another interior designer and alumna of a 2018 Ireland retreat in Toulouse, France. “Everything is so outside of the ordinary from what we have, which is what I really love.”

One piece captivating the group was a blue-ash glaze ceiling fixture by Ryan Mennealy Ceramics for $16,000; it spelled out “equality” in Morse code.

A retreat with Ireland wouldn’t be complete without friend and fellow alum of Bravo’s “Million Dollar Decorator,” Martyn Lawrence Bullard, who welcomed us into his Melrose atelier with champagne and hugs.

“It’s always so nice to meet new design enthusiasts and share some knowledge with them,” he said, adding that the camaraderie and creative energy “inspires not only them but also us.”

For interior designer and artist Terra Palmer, meeting Bullard was one of the main purposes of the trip. “I just presented some of his light fixtures to a client; not a lot of people know about them yet and they’re beautiful and on the cutting edge of what’s new and fun,” she said.

The next morning at Ireland’s 4,200-square-foot Santa Monica home, where the participants also stayed, the group delved into serious shop talk — budgets, letters of agreement, presentations, fees, etc. — with the hostess balancing levity and gravity.

“Whether you’re going to hire a decorator or you are a decorator — especially when you end up working with friends — you’ve got to have that letter of agreement. You must,” said Ireland, who’s adamant about transparency with her clients, clearly delineating mark-ups, taxes, fees, budgets and schedules in all her agreements.

Conversation then shifted to marketing and styling e-commerce vignettes, little decorated scenes with items for sale, akin to Ireland’s design and shopping platform, the Perfect Room.

The weekend culminated with a feast at Ireland’s home honoring the participants, joined by her family, friends and fellow designers.

Though there’s “only so much you can do in a short visit,” Ireland said, the experience offers an exclusive “taste of all these great places and people” that inhabit her world, while creating “memories and relationships that I hope last a lifetime.”

Many of the shops mentioned are still selling online during the coronavirus shutdown.