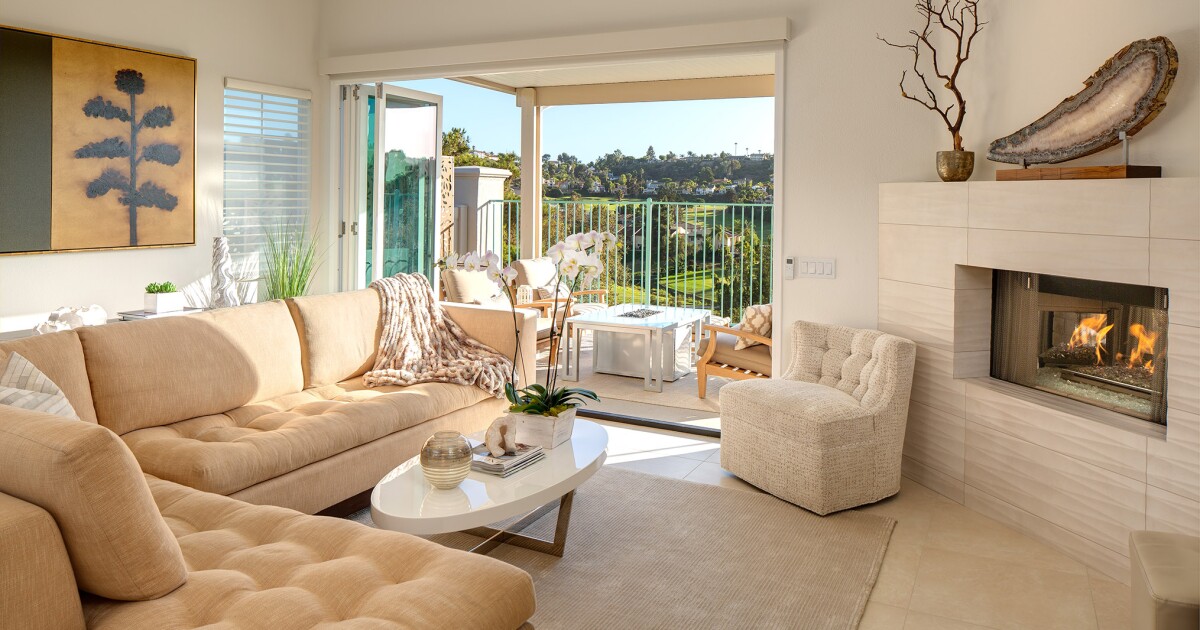 For eight years, Renae Farley and her husband, Richard Pommer, spent weekends looking for their forever home, a place that was conducive to entertaining and had a downstairs master suite. They were thinking about building a home when Pommer was diagnosed with a rare form of cancer. He died in January 2018. Out of habit, Farley continued the house hunt for a while, but became frustrated and decided to drop the quest. As she was unsubscribing from a real estate site, a house caught her eye.

The home, in a quiet La Costa neighborhood abutting the golf course, fit her requirements. So she decided to take a look.

When Farley stepped inside the 2,300-square-foot home, she knew. “I bought it on the spot,” she said. “It had perfect bones and perfect feng shui.”

The 26-year-old, four-bedroom, three-bathroom house had been owned by one couple since it was built and was still in original condition with closed-off spaces, pony walls and lots of small, white square tiles set in dark grout.

For Farley, an interior designer for 38 years, it was a blank slate.

In January 2019, she took the home down to the studs, and in six months, transformed it into an open contemporary space designed for entertaining friends or quiet evenings. The house was scheduled to be one of 14 recent remodels on the April 25 San Diego Chapter of the American Society of Interior Designers Kitchen Baths & More tour, which was postponed because of the coronavirus pandemic and is tentatively rescheduled for July 11.

Because of the long search for the right home, Farley said she already had a vision in her head about how she wanted the place to look. The style is clean and comfortable, with a neutral color palette.

Farley created an open floor plan by removing the wall between the kitchen and what was the dining area. She turned the living room by the front door into the dining room and walled off a section of the former dining room to create a butler’s pantry, which flows into the kitchen.

“I love to entertain and to cook and I wanted everything out in the open,” Farley said of her decision to add a butler’s pantry for more counter and cupboard space. Plus, it keeps dirty dishes out of sight during dinners and makes cleanups efficient with an extra dishwasher and sink. One window in the kitchen area was removed to add a wall of cabinets and ovens.

The kitchen is fully integrated with the living area that opens to a small yard overlooking the golf course. This was achieved by removing the pony walls between the kitchen and living area (formerly the family room) and replacing a window and sliding glass door with a 12-foot, bi-fold door to help unite the living room with the covered patio.

The brick fireplace in the corner of the living room was updated with porcelain tile. Farley also removed the hearth to create a modern streamlined look. The remote-controlled gas fireplace has a mirrored back, which, Farley said, is “a new thing now.” The comfortable chair next to the fireplace has become one of Farley’s favorite places to sit.

The remodel also squared off the rounded edges of the landing on the stairs, which protrudes into the living area. The adjacent wall also had a rounded corner, which was squared off. The straight lines combine with walnut steps and brushed stainless-steel rails to achieve the contemporary look Farley sought. Art pieces add pops of color. Farley kept the original niche on the wall next to the stairs. In it is an African sculpture of an elephant, one of many art pieces collected by Pommer, who loved elephants.

The downstairs master bedroom suite was redesigned to meet Farley’s needs. She removed the linen closet to expand the bathroom. It now has a walk-in shower and a large soaking tub, plus a small makeup vanity. Dark wood and neutral tones continue here, as do the 24-square-inch porcelain floor tiles used throughout the public areas of the home.

A mother-of-pearl tile accent strip creates a waterfall effect behind the tub faucet providing a focal point along with the circular chandelier over the tub.

“I love anything pearl,” Farley said.

Farley moved a wall in the master bedroom, eliminating the sitting area to expand the closet. The large, walk-in has natural light from the window that was kept in its original place.

The two upstairs bedrooms are reserved for guests and the additional small bedroom downstairs has been turned into an office/gym/meditation area. Farley is also a runner. She said while she jogs, she gives thanks for all she has while heading out, then on the return run, she thinks about her future and establishes her goals.

The native San Diegan earned a bachelor of fine arts degree in interior design from the Design Institute of San Diego and worked for the Sweetwater Authority as a draftsman. She was the first female technician in the civil engineering department.

Interior design, she said, is all about space, scale and proportion.

“I love all design styles,” Farley said. “But I’m a minimalist. I like clean lines.”

The simple, easy-care style of her home continues in the backyard. The entire area is concrete with a river-rock border. A water feature, fire table and seating area extend the home’s gathering spaces outside. The far end of the yard has an under-lit, cantilevered concrete bar table — a place to sit and watch the sunset.