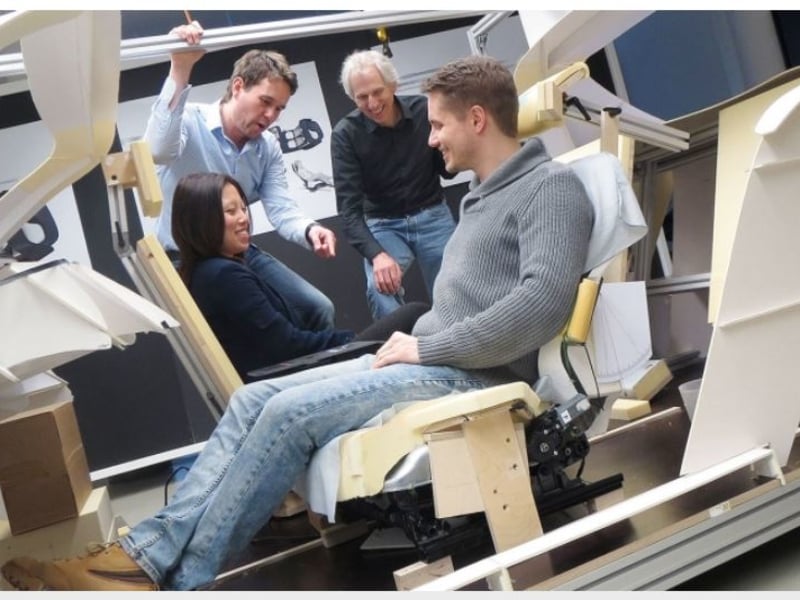 Gorden Wagener has spent a good amount of his coronavirus quarantine thinking about waffles.

Daimler’s head of design, who created such iconic cars as the Mercedes-Benz SLR McLaren and Vision Mercedes concepts, wanted to bake bread during his pandemic free time, but soon found the bread maker he wanted was out of stock. So he ordered a waffle iron from Williams-Sonoma instead, and the German and Germany-based designer has been perfecting his at-home recipe for the delightfully dimpled grid of syrup holders ever since.

That’s how he landed on the idea for a glove-box waffle catapult.

When I heard he’d become a waffle master, I asked whether he could do deliveries.

“The car is easily smart enough to launch a waffle accurately — you could write smart messages on the waffle and then throw it!” Wagener suggested on a recent phone call. A paperboy tossing waffles instead of the morning news, he would do it from the new GLE Coupe.

Wagener, of course, spends the bulk of his workdays thinking about things rather more serious than breakfast, but the time at home has spurred him to think outside the traditional box in a lot of ways. While the pandemic is tanking global markets and has pushed the automotive industry to a standstill, Wagener has been exploring what COVID-19 means for the future of design.

“The pandemic will change our perception of how we experience safety and luxury in the future,” Wagener says, predicting that the two will become much more intimately intertwined. “This can be a challenging but an exciting time.”

The new normal for safety

Across the car world, designers remain among the relative few in the industry who can continue their daily work uninterrupted, more or less. While factory stalls everywhere from Volkswagen Group to General Motors sent thousands of line workers home, the men and women who work to outline your car’s roof or orchestrate the feel of the lambswool carpets beneath your feet can gather virtually to push projects forward.

Conversations among their lot have long centered around the notions of safety and luxury — how they intersect and how they’re evolving. What’s different already during the time of coronavirus is that new ideas about safety inside cars have emerged.

“The future more than ever will be about the freedom of going places safely — and these cars will be more than ever about their interior,” Felix Kilbertus, the head of exterior design for Rolls-Royce, said on a Zoom call on April 21. “An interior has always been a safe space — people will do all kinds of things in their car they won’t do on their own front lawn,” like hold business meetings, apply makeup, and, uh, pursue romance.

“The idea of the interior as a grand sanctuary has become very relevant,” he explained. “I believe it is a transformation that this current situation accelerates.”

“People want to feel protected, and now with the pandemic, even more so,” agreed Adam Hatton, the creative director for exterior design at Jaguar Land Rover, speaking by phone the same week. “We are working on the idea of Jaguars being a big, beautiful sanctuary — like a spa. It’s even more relevant now than ever.”

“The most important thing for a long time has been to know that you and your family are safe,” Wagener says. “The important question now is how to protect your health.”

Now more than ever

The idea that a vehicle can be a protective cocoon from harsh elements has always excited, of course, dating back to the coach-built Packards and Continentals and Rolls-Royces of the previous turn of the century and, before that, to the gilded and decadent confines of horse-drawn coaches. The concept of car-as-spa these days means calming mood and ambient lighting, state-of-the-art sound systems, massaging seats, warm and plush trims — all of which already exist in cars from the BMW M850i to the Porsche Cayenne Coupe to the Mercedes AMG CLA 45.

In 2010, Infiniti equipped its M line with a plasma cluster ion generator called “Forest Air,” which it said could sterilize pathogens while a sensor blocked polluted air and particulate matter from the cabin. In 2014, a joint venture of Peugeot-Citroen and Dongfeng Peugeot Citroën Automobile even installed air conditioning systems in Elysée model cars that could filter out 90 percent of pollutants. The cars come with a negative-ion generator that kills mold and bacteria, as well as dissolves harmful gases in the air.

In the U.S., vehicles such as the Mercedes GLE AMG and Volvo’s XC90 and S60 include built-in air purifiers and/or fragrance disseminators set in the glove compartment. Tesla offers a HEPA filtration system in the Model S and Model X with the claimed capability to reduce pollution levels in the vehicle to “undetectable” levels.

Rolls-Royce and Bentley offer high-end air filtration systems throughout their lineup to help remove particulates and pollen. Such systems work through the car’s ventilation and climate systems to scent and cleanse the cabin. Some brands even offer a layer of active charcoal inside the car that can remove odors and ground-level ozone.

But the notion that a modern car should totally purify any significant amount of air outside the car is relatively new.

“We are working toward the idea that the car could actually take bad things out of the air, almost clean the air,” Wagener said. “It’s an opportunity to address the sustainability issue that we have already been considering.”

Judging from past history at Mercedes and its competitors, the system would be similar to existing processes that work to remove airborne allergens like car fumes — but would also work on a broader level than just the car itself, effectively and significantly cleaning the air immediately surrounding the exterior of the vehicle.

Mercedes has been exploring such options for decades: In 1989, the Mercedes Benz SL roadster was the first serial production model to come with a standard cabin air filter. By 2017, Mercedes was the first car manufacturer to achieve the asthma- and allergy-friendly certification for its interior cabin air filters from Allergy Standards Ltd. and the Asthma and Allergy Foundation of America (AAFA).

Along with physical health concerns like clean air, coronavirus has prompted designers to consider more closely the idea of mental and emotional health as it relates to your vehicle.

Again, this idea has been out in the ether for a bit. Models such as the GLE Coupe already offer “energizing comfort” settings that run through light mindfulness exercises to help promote circulation, breathing, and inner calm. Their 10-or-so-minute routines encourage deep breathing, meditation, and gentle stretching.

But mental health during and after the psychic trauma of an historic pandemic will mean a whole new level of concern. Future drivers will expect total efficiency and total isolation — for their own safety, says Alister Whelan, the creative director for interior design at Jaguar Land Rover.

That means unremarkable, discreet, and even forgettable exteriors (like, say, the indecipherable and ubiquitous Tesla Model S), which are all the better for staying under the radar. It also means superior alarm and security systems that can detect potential nefarious movement even before it happens. (The market for armored vehicles, by the way, has recently reached sky-high proportions.)

It could even mean an invisibility cloak. If that sounds far-fetched, it’s not. Mercedes was experimenting with one made from LEDs and a camera back in 2012. Toyota patented a cloaking device in 2017 as a way to help drivers see through those pesky A-pillars that can hamper visibility. Toyota at the time said the device would use mirrors to bend visible light around the A-pillars to allow the driver to “see” through them. This would give drivers a wider view of the road and their surroundings.

This time, though, the application could be way more serious. It could hide the car from governmental officials or thugs, during security breaches on public roads, or help avoid an outright attack.

The folks at Rolls-Royce talk like they’re already working on it.

“The word ‘invisibility cloak’ comes to mind, certainly,” Kilbertus says. “It’s a car that could move so quietly, so discreetly, that it would go undetected from outside threat.”

Even, one would suspect, the threat of incoming waffles.