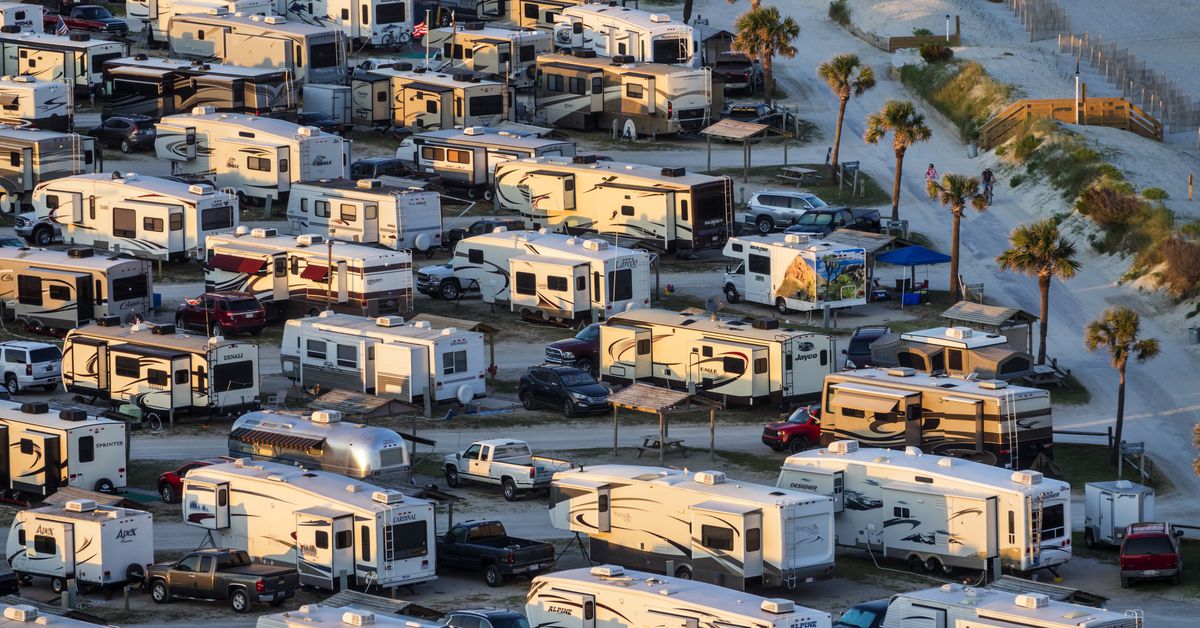 Whether you’re in Texas or Vermont, Los Angeles or Orlando, if you walk onto an RV sales lot you’ll likely see the same thing: A sea of identical RVs. Some might be travel trailers and fifth wheels, others are larger Class As and Class Cs, but they feature the same—and dare I say bland—exterior styling. Love campers and trailers? Come join our community group.

You know the one. It’s like someone started at the front of the camper and kept painting long lines that stretch to the rear. Some begin high and end low, others boldly sweep into half circles and curves; but somehow, on RVs big and small, decorative swoops are the go-to design element of choice.

They’re also all the same colors. White is almost always the preferred background color for swoops, although occasionally beige and gray make an appearance. Maroon, oatmeal, and brown swoop together on one RV, while gray, silver, and black mingle on another. If you’re lucky you might see a blue swoop or two, but for the most part RV swoops are stuck in the neutral section of the paint catalogue, endlessly flipping from Tavern Taupe to Functional Gray, with a bit of Classic Mauve thrown in.

Why do we keep designing ugly RVs?

On the one hand, RV swoops can distinguish campers from other large vehicles on the road. From afar, buses and trucks have similar shapes; all are long boxes that can stretch 20, 30, and even 40 feet down the road. Do the swoops break up the blank exterior on campers, calling attention to the swoops’ highs and lows instead of a boring rectangular silhouette?

That could be the origin story of the ubiquitous swoops, according to Garrett Finney, founder and CEO of Taxa Outdoors and an avowed non-swoop camper designer. “My best guess is that those swoops were invented by some person (in the ’80s? ’90s?) to break up the huge white hulking mass of a typical white box exterior,” he says. “Or maybe [the swoops were] so large birds would not fly into them—like the stickers one puts on large glass windows.”

I’ve also wondered if the swoops are supposed to indicate some sort of carefully crafted idea of fun, separating recreational campers from commercial vehicles. Driving down the road in a camper, the swoops scream to the world, “Look at me, we’re on vacation!” Is everyone else supposed to look back and think, “Wow, those campers are having a swooping good time?”

Or perhaps the look trickled down from the aesthetics of high-end RVs, the giant Class As that are so large they can fit a sports car in their mobile garage. Swoops still dominate in this arena too, but higher price tags sometimes get you more colors and more complicated, deftly applied swoops.

If a million dollar RV isn’t in the cards—and let’s be honest, it’s probably not—you can also buy the graphics online. Just in case your RV doesn’t have enough swoops, head to Amazon and search for “RV graphics” for dozens of kits made from premium outdoor vinyl. One $199.99 kit includes no fewer than 30 graphics for both sides of your camper, all in shades of black, burgundy, charcoal, and gray; another kit gives you the same in black, intense blue, and light gray.

If you really want to go all out, you can combine RV swoops with other cliched camper graphics, like a swooping mountain scene, a swoop-inspired American flag, or maybe an eagle. These types of designs are so predominate that when you perform a quick Google image search for “RV graphics,” swoops are the only type of graphics that appear.

In conversations at the RV Industry trade show, RVX, I asked around about the swoops and everyone from owners to marketers would shake their heads, unsure why swoops are the way they are. It’s enough to make people like Finney wonder, “Is there only one graphic design studio in Elkhart [the Indiana city where most RVs are manufactured]? This is insanity. It’s like the whole industry has ignored the digital printing revolution and the possibilities that go with it.”

This isn’t to say that people can’t like RV swoops and continue to buy swoopy campers. But the fact that it’s hard to find a camper without swoops points to an industry that’s stuck in a rut.

In a digital age that’s increasingly visual, RV swoops don’t just seem like an outdated trope in need of a refresh, they seem downright negligent. Millennials now make up the largest group of campers. Although admittedly many of them are currently tent campers, many are also entering the small travel trailer, van, or pop-up trailer markets. And from one millennial to other generations, I say death to the swoops.

The most popular campers on social media prove the point. There’s nary a swoop to be found on the more than five million entries with the #VanLife hashtag. The vans are solid colors ranging from grays and whites to bright reds and yellows. Some have black accents in roof racks or bumpers, and perhaps a few boast custom-designed graphics of sleek stripes or silhouetted trees. Vintage Volkswagen buses offer another example; the buses are often cheery oranges or greens, some with a striking two-tone color scheme.

Airstreams, too, are a perennially popular camper for photographing, perhaps because the riveted aluminum body has saved the brand from swoop affliction. We can list quite a few innovative RV companies that are swoop-free—in fact that’s mostly what we cover here at Curbed—but it’s amazing how small some of these brands are compared to the Forest Rivers and the Thor Industries of the world, who pump out swooped RVs like their lives depend on it.

Of course, there’s hope in up-and-coming camper manufacturers like Taxa Outdoors, SylvanSport, and the like, as they provide fresh takes on RV style. And even big-time brands like Winnebago are designing at least some of their campers without the swoop; Class B campers like the Revel and even the Class A Horizon are relatively free of swoops.

For me, I can’t wait until the industry moves beyond the swoop, relegating it to an unfortunate chapter in RV history. Or maybe in a few decades the swoop will be hip and vintage, ready for a modern reboot. Until then, I’ll be cruising the American West in my solid colored, proudly swoop-free adventure van, waiting for RV design to go a bit more modern.

A daily dose of design and real estate news, intel, and eye candy