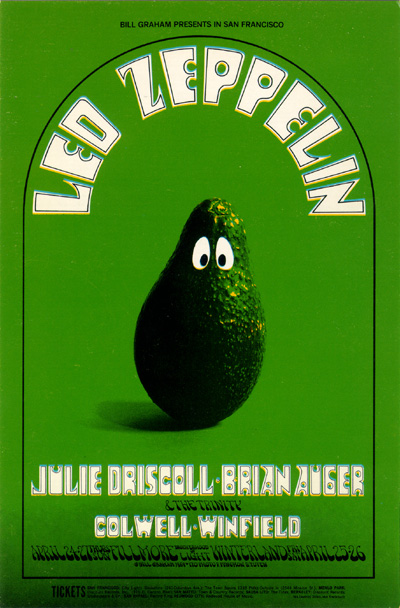 Randy Tuten’s poster for Led Zeppelin, April 24-27, 1969, Fillmore West and Winterland, was an update of an assignment for a class in college. Via Randy Tuten.

When the origin stories of San Francisco’s “Big Five” rock-poster artists of the 1960s are told, they usually include Wes Wilson’s epiphany upon seeing an exhibition of Viennese Secessionist posters, whose lettering style he would embrace as his own; Stanley Mouse and Alton Kelley’s appropriation of a 1913 illustration of a rose-crowned skeleton, which the duo repurposed for a Grateful Dead poster; the influence of Southern California surf and car culture on Rick Griffin; and the oft-repeated fact that Victor Moscoso was the only one of the bunch who had any formal art training, whose rules he systematically ignored.

“San Francisco was always in the back of my mind when I was living in Los Angeles.”

In contrast, Randy Tuten, one of San