ANN ARBOR, MI – Albert Kahn’s fingerprints are all over hundreds of buildings throughout southeastern Michigan. The German-born architect is perhaps best known for his work with industrialist Henry Ford, building the Ford Motor Company’s massive River Rouge Complex in Dearborn in 1917. The complex, as well as the 30-story […]

ANN ARBOR, MI – Albert Kahn’s fingerprints are all over hundreds of buildings throughout southeastern Michigan.

The German-born architect is perhaps best known for his work with industrialist Henry Ford, building the Ford Motor Company’s massive River Rouge Complex in Dearborn in 1917. The complex, as well as the 30-story Fisher Building in Detroit, are among his constructions recognized as nationally historic places.

Dozens of examples of his work are also scattered across Ann Arbor and University of Michigan’s campus. These include mansions, fraternity houses, office buildings, auditoriums, libraries and more.

Here are a series of examples of Albert Kahn’s Ann Arbor.

A member of the National Register of Historic Places, Kahn designed this building for members of the Delta Upsilon Fraternity in 1903.

The Tudor Revival mansion at 1331 Hill St. in Ann Arbor is considered the oldest fraternity house in Ann Arbor still in use by the organization that originally used it.

It was designed in an “E” shape with some pre-colonial English architecture, such as the woodwork and plasterwork on the interior and the stucco of the exterior, according to the Ann Arbor District Library.

In 1991, the building was listed on the Michigan State Register of Historic Places, and was nationally recognized in 1995.

A fire destroyed the original building in May 2008. The UM fraternity chapter opted to renovate and restore it in 2010, and that version stands to this day in the same location.

The Art Deco building at 340 E. Huron St., built in 1936, was home to The Ann Arbor News for more than seventy years, until 2009. The three-story building consists of adjacent parking lots and an entrance a block north on Ann Street.

The building was owned by Herald Publishing when it was sold to the University of Michigan Credit Union in 2010. The estimated market value of the building at the time was $10.6 million, according to MLive/The Ann Arbor News.

UMCU is currently in the process of renovating the space, including the exterior façade, which will be re-clad in limestone to match the historic north portion of the building, according to MLive/The Ann Arbor News.

That renovation, which includes opening up of the exterior space for a new UMCU branch, is expected to conclude sometime in 2023, credit union officials said.

Several blocks down from the Delta Upsilon house is another of Kahn’s homes on Hill Street.

The residence at 2101 Hill St. near UM’s Central Campus features many of the trademark design characteristics Kahn is noted for in his residential, commercial and industrial buildings, Berkshire Hathaway HomeServices listing agent Jeffrey Post told MLive/The Ann Arbor News in 2021.

The 7,100-square-foot classic Georgian Revival home features seven bedrooms and seven bathrooms that showcase the proportion, balance, style and elegance that are found in many of the buildings that made Kahn one of Detroit’s most noted building designers, Post said.

Designed by Kahn in 1913 for University of Michigan professor George Patterson and his wife on land that was previously a fruit orchard, the home was later owned by the Alpha Epsilon Pi fraternity. It has since been owned by three other families and has two acres of mature trees and gardens.

Another example of Kahn’s homes is located at 2100 Londonderry Road.

From Leonard Bernstein to Bob Marley to Kid Cudi, Hill Auditorium has been the site for some of the most prominent musical acts to ever hit Ann Arbor.

The Kahn and Wilby architectural firm completed the building in 1913, and it was inaugurated at the 20th Ann Arbor May Festival.

With seating for 3,538 people, the space is known for its acoustics, Greek façade on the exterior and three levels of seating inside.

UM officials approved a $38 million renovation that started in 2002, updating the infrastructure and restoring several exterior and interior elements originally designed by Kahn “back to original splendor,” according to UM.

The venue reopened in 2004, and a UM documentary on the auditorium’s history can be viewed online here.

Couzens and other UM residence halls

Couzens Hall, originally built for UM students in 1925, is one of Kahn’s many residence halls built for the university.

Located on 1300 E. Ann St., the four-story hall is known for its dark red brick exterior with white trim. It is organized with two wings that form the letter “H.” A garden, sun porches on each floor and an athletic field were part of the original Kahn design at the rear of the building.

The infrastructure was modernized in a $49 million renovation in 2010. Other examples of Kahn-designed residence halls include Helen Newberry and Betsy Barbour halls.

Kahn was behind two of UM’s signature libraries: the Hatcher Graduate Library and the Clements Library that houses hosts of historical artifacts.

The Hatcher library was completed in 1920 by Kahn. The space was updated with an eight-story addition in 1970 to accommodate the growth in university collections.

By 1971, the original Kahn designed combined with the addition to form what is known today as the Harlan Hatcher Graduate Library, located at 913 S. University Ave.

Mastodon skeletons and museum exhibits used to be the function of the Ruthven Museums Building at the University of Michigan.

The Central Campus building is now known as just the Ruthven Building, and it houses the nuts and bolts operations of the Ann Arbor-based university’s administrative wing.

The building, built in 1928 based on architect Albert Kahn’s designs, spans 138,000 square feet. The rotunda from Kahn’s original design remains spacious, and includes a domed plaster ceiling with carvings of flowers, monkeys and more.

One of the newest features at Ruthven is University Hall, a two-story room that hosts UM Board of Regents meetings. Another is the office of new UM President Santa Ono, as well as support and communications staff offices nearby on the third floor.

Completed by Kahn in 1924, Angell Hall is the centerpiece of UM’s Central Campus operations.

Former UM President Marion Burton pushed for Angell Hall’s construction as early as 1920 to house the expanding College of Literature, Science and Arts.

“It [should] be beautiful, dignified, and commanding,” Burton said, according to UM records. “It [should] help give unity and form to the entire campus.”

It was designed to match other structures such as Hill Auditorium, Clements Library and more. The Greek Doric columns were part of Kahn’s classical vision for the entrance along South State Street, while several sculptures and mottos were carved around the space to “symbolize educational values,” according to the Bentley Historical Library.

Prior to the Fleming and Ruthven buildings, Angell Hall was also the home to the offices of multiple UM presidents.

Perhaps the signature building on UM’s Central Campus, Burton Tower was designed by Kahn in 1935 and completed and dedicated by December 1936.

Located in Ingalls Mall off North University Avenue, the tower is named for Burton, who died in office in 1925. It stands 192 feet tall and is built of rubbed Indian limestone.

Kahn described the tower’s design as “simple and direct,” according to the Bentley library.

The carillon in the bell chamber was donated by Charles Baird, a former UM athletic director. The largest bell weighs more than 12 tons.

10 remnants of the University of Michigan’s ‘lost campus’

Lost to time: These 6 University of Michigan student hangouts are gone but not forgotten

Tue Jan 17 , 2023
For New Albany interior designer Lisa Panitz, work—like life—is ever-evolving. “With design, things have always been about change,” she says. But that’s also the case for life in today’s world. “Everything these days is constantly moving,” Panitz continues. “If you can find a way to be comfortable with change, that’s […] 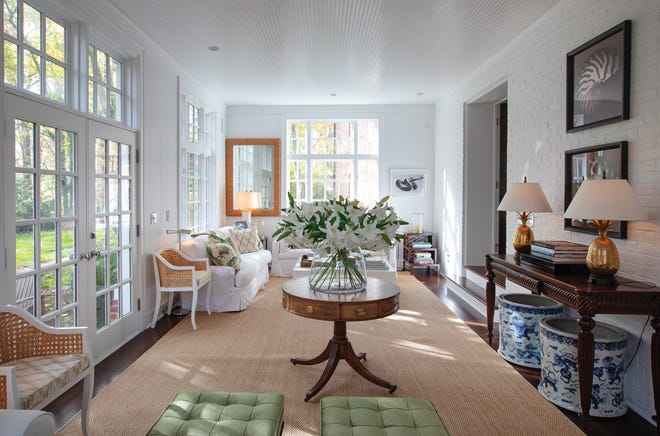