Component supplier ZF says it has made dramatic advances in its steer-by-wire (SbW) technology that overcome the issues of steering feel and fail-safe redundance. Meanwhile, Peugeot’s Inception concept car showcased that company’s “Hypersquare,” a rectangular device that provides steering input when the car is piloted manually and that stows away […]

Component supplier ZF says it has made dramatic advances in its steer-by-wire (SbW) technology that overcome the issues of steering feel and fail-safe redundance.

Meanwhile, Peugeot’s Inception concept car showcased that company’s “Hypersquare,” a rectangular device that provides steering input when the car is piloted manually and that stows away in the dashboard when the car drives itself.

Cars that drive themselves will obviously steer by wire, but the technology needs to be mature for use in that application. Even if autonomous cars are further in the future than was previously believed, separating the steering wheel from the steered wheels has benefits in human-piloted cars.

ZF previously announced a deal with Chinese EV startup Nio to provide that company with SbW systems for its cars. At CES, ZEF presented a racing simulator for drivers to try a virtual version of the system for themselves.

Indeed, no less an authority than Lamborghini chairman and CEO Stephan Winkelmann stopped by the ZF booth to take the simulator for a spin, as evidenced by a photo of a grinning Winkelmann that ZF board member Martin Fischer posted to LinkedIn. “The future of mobility will be software-driven and that means steer- and brake-by-wire technologies like those that ZF produces will become a big part of future functionalities that help make mobility safer, cleaner, more comfortable and affordable for everyone, everywhere,” Fischer wrote in that post.

In an interview at the show, Fischer explained that ZF will begin manufacturing its steer-by-wire system this year and that Nio plans to deliver cars using the system starting in 2025.

Eliminating the physical connection between the steering wheel and the road wheels provides a raft of potential benefits. Removing the steering column from the front of the car is safer in the event of a crash. Additionally, crash structure can be installed without providing space for the shaft to the steering rack, making it easier to reinforce the front end of vehicles.

The response to steering input can vary according to the needs of the situation, so the steering is slow and steady at highway speeds but while parallel parking drivers can get a lot of steering angle with very little input. “That is a huge advantage for city driving,” said Fischer.

The powerful electrical architecture being installed in new cars along with their fast data networks makes SbW truly practical for the first time, according to Fischer. “That power enables us to do stuff we couldn’t do in the past,” he said.

The absence of a steering shaft gives rise to concern about emergency backup control in the event of a failure. ZF’s solution is redundancy through the entire system, with all of the redundant components powered by separate circuits, according to Christophe Marnat, executive vice president of active safety systems for ZF. “The power pack on the steering wheel is two motors in one, with two separate power supplies and two actuators as well.” 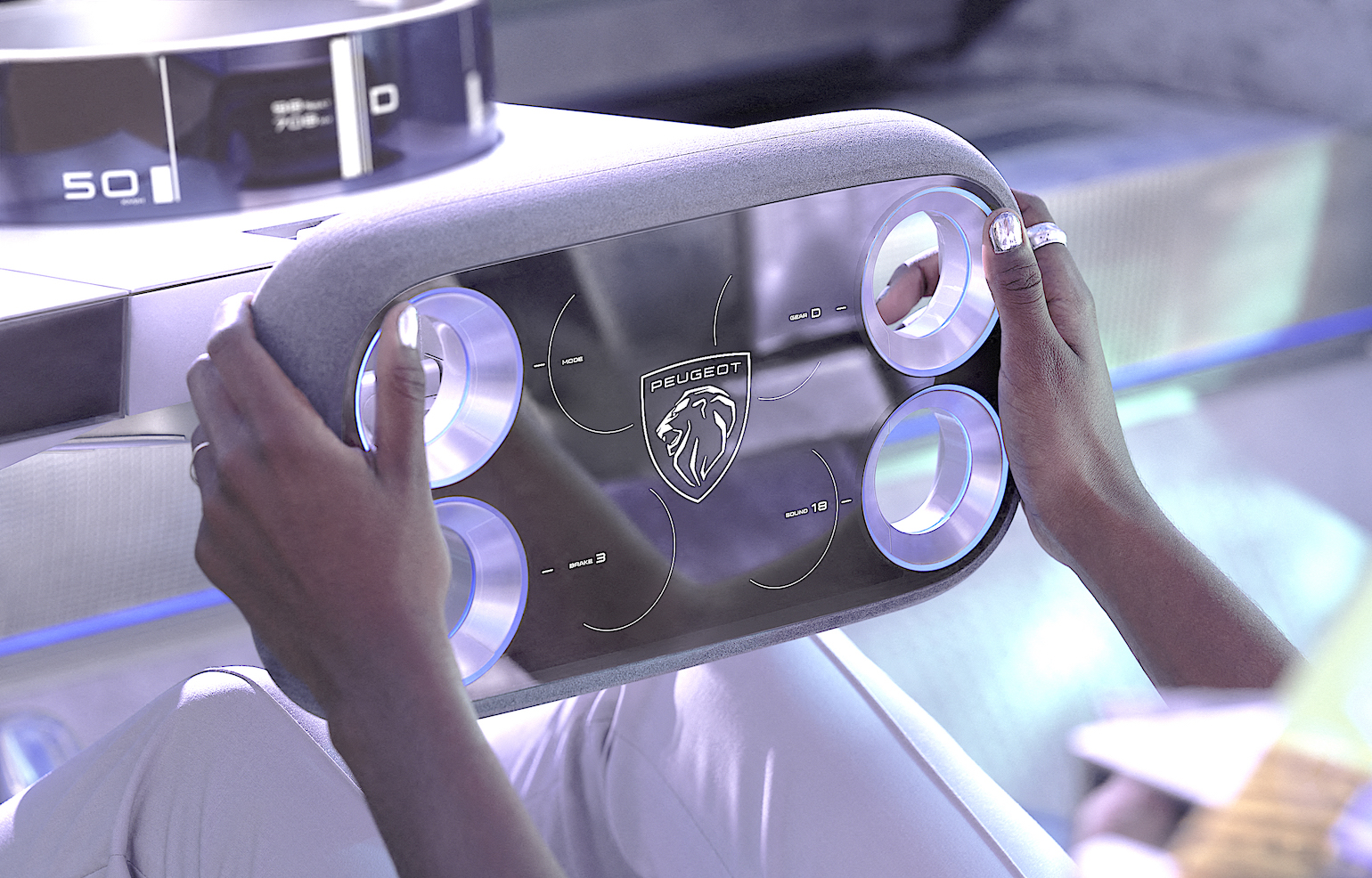 The Hypersquare is the reimagined stowable steering wheel for the Peugeot Inception concept car.

“The actuator needs the software to do that for very fine management of that feedback,” he said. But even with smart programming and speedy network communications, there is still fractional lag from the steering wheel’s response if it employs a single actuator, as that device must reverse direction when switching steering direction.

Having dual actuators lets ZF apply them both, even in opposition to one another, so the handoff from one turning in one direction to the other tugging in the opposite direction is instant, without the inertia of an actuator reversing itself. “You can play the actuators against each other,” Marnat explained.

As a safety system, steer-by-wire can directly belay orders from the helm that would crash the car, rather than using the brakes and throttle to minimize the effect as today’s electronic stability control systems do. That could mean slowing the response to abrupt input that could induce a spin on slippery surfaces for example.

ZF says it has “significant contracts by multiple customers with steer-by-wire launches scheduled in all major regions,” so we might not have to wait for the Nio in 2025 to see steer-by-wire in action.

Fri Jan 13 , 2023
Tasked with renovating an old barn in Igornay, France, the Faure & Miniau Agency recently completed the Les Greniers de Babel house after two years of work. The clients had a desire to transform the barn to accommodate their family when they come visit on vacation. The project consisted of […]