Written by SuperYacht Times We took a look at some of the largest superyachts due to be launched over the next year, from Lürssen to Feadship and much more!Photo: Christian EckardtLuminance | 145-metre | Lürssen  The largest yacht we are expecting to see join the fleet is the 145-metre Luminance. We […]

We took a look at some of the largest superyachts due to be launched over the next year, from Lürssen to Feadship and much more! 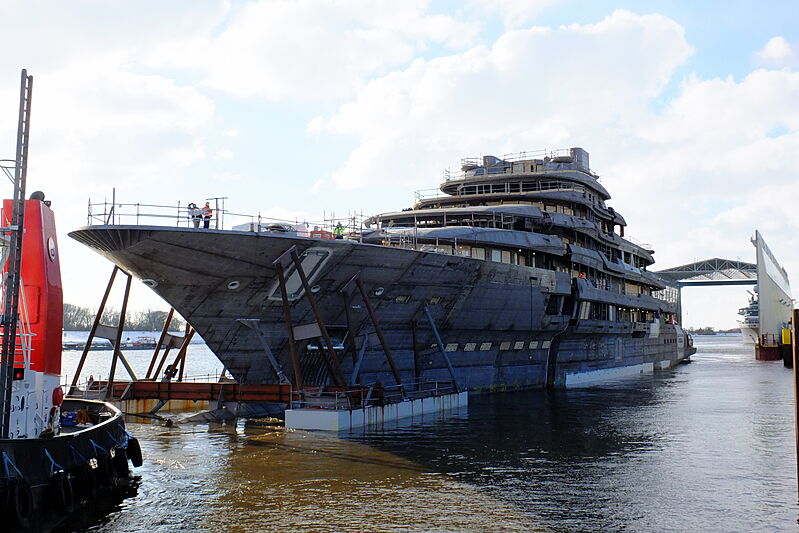 The largest yacht we are expecting to see join the fleet is the 145-metre Luminance. We are not entirely sure if Luminance will be finished in 2022 or 2023 as though her hull was transported in 2021, she has not been seen since. Lürssen however have a solid reputation for producing high quality yachts to their delivery dates, so we will have to wait and see! Unlike the about two vessels we do know the interior designer of the yacht, with the owner selecting Zuretti Interior Design. 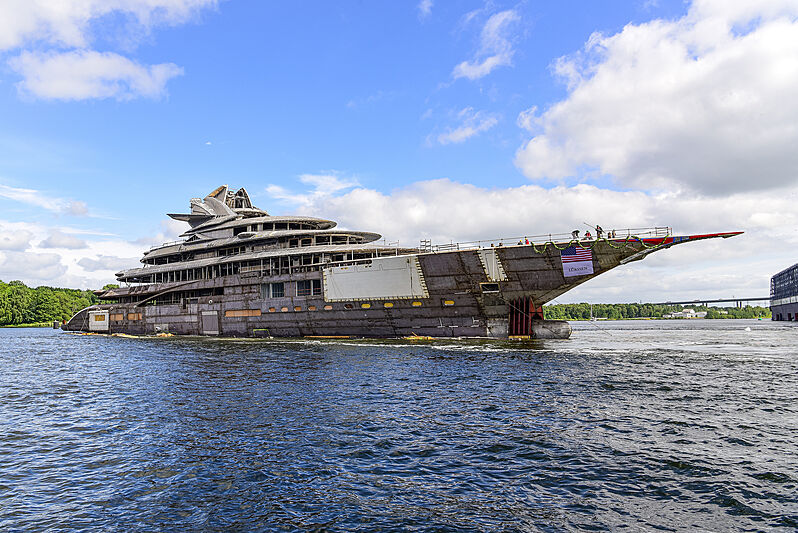 The hull of the 122-metre Lürssen superyacht was launched in June of 2021. She features exterior design from the boards of Nuvolari Lenard, while her interiors have been penned by British design studio, Reymond Langton. She was first made public in 2019, with the announcement of her sale by Moran Yacht & Ship, who compiled the technical specifications and are acting as supervisors of the project on behalf of the owner. The superyacht Jag has been sold to an American client, and will accommodate as many as 20 guests across 11 staterooms. Made from steel, Jag’s guests will be taken care of by a crew of 40. 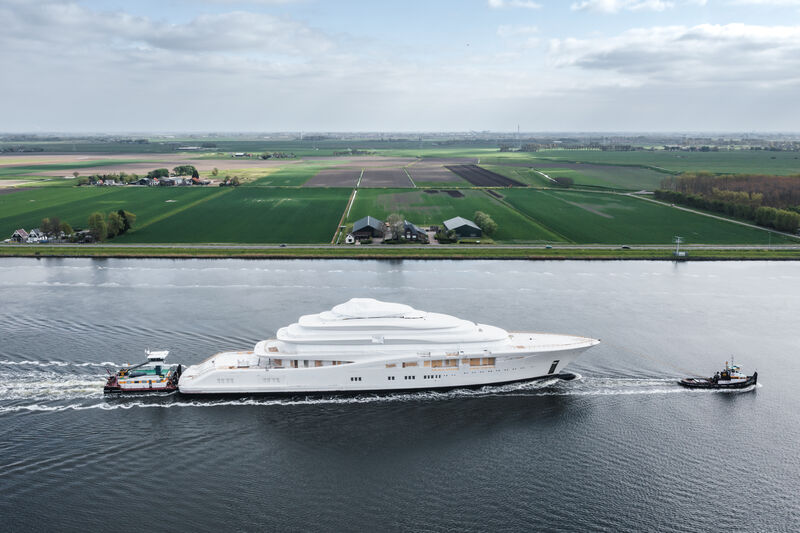 The 118.8-metre Feadship superyacht Project 821 was spotted in April this year as she was moved from the NMC Shipyard in Nieuw-Lekkerland before her hull and superstructure were joined at Van der Wees’ facilities in Dordrecht, Netherlands. Although Project 821 has been kept tightly under wraps and is shrouded in secrecy, she has been estimated to exceed the 7,000 GT mark, which will make her the largest superyacht built at the Dutch yard. 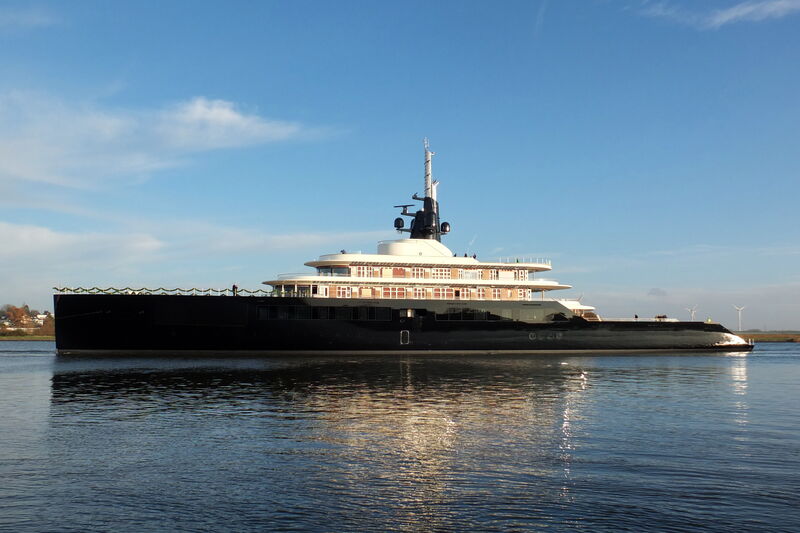 Abeking and Rasmussen’s 118-metre Project 6507, Celerius is an exciting new superyacht, not least because her exterior lines come from the boards of Joseph Dirand Architecture who is a newcomer to the superyacht industry. The keel of this new superyacht was laid in August 2019 and she will be the flagship of the shipyard until the 120.9-metre superyacht, Project 6514, is launched in 2025. In December 2022 Abeking & Rasmussen launched the yacht, and announced that Cornelsen & Partner Yacht Consulting had overseen her construction. The few details of Celerius that have been released infer that she will be a true adventure vessel, home to an array of water toys including a submarine. 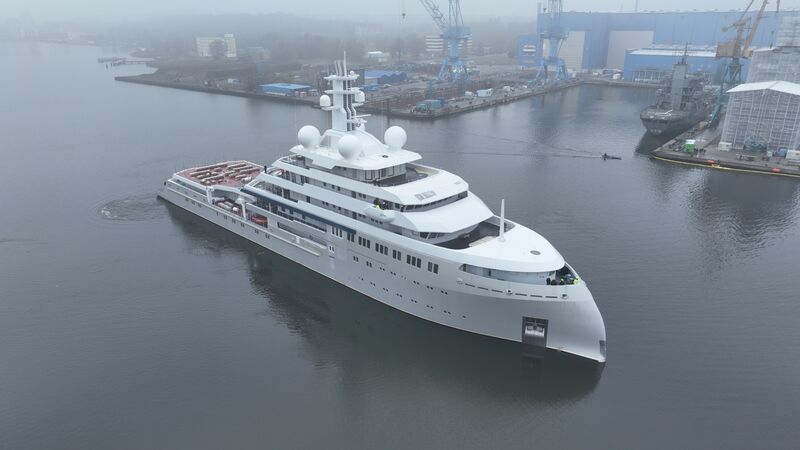 Recently seen for the first time after her wrappings were removed is the 107-metre Lürssen superyacht Icecap. Built at the Peene-Werft Shipyard in Wolfgast, Germany, Icecap is set to offer around 6,000 GT volume and has been designed by Salt Ship Design, who also penned her naval architecture. She has a steel hull and aluminium superstructure and will be a state-of-the-art superyacht when she’s launched, which is likely to be late this year or early next year. 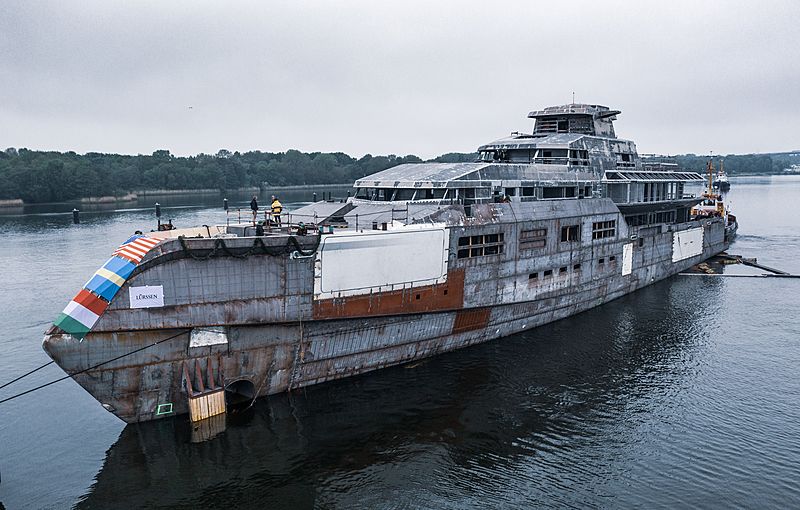 One of the most unusual yachts that should be entering the fleet this year is Lürssen’s Project 1601, the first on our list below the 100 metre mark. Designed by Espen Øino International, 1601 is believed to belong to a well known tech entrepreneur and features a unique bow form that comes to a point in its centre. The yacht’s interior is the work of Dölker + Voges GmbH and we estimate her volume to be around 3,600 GT. 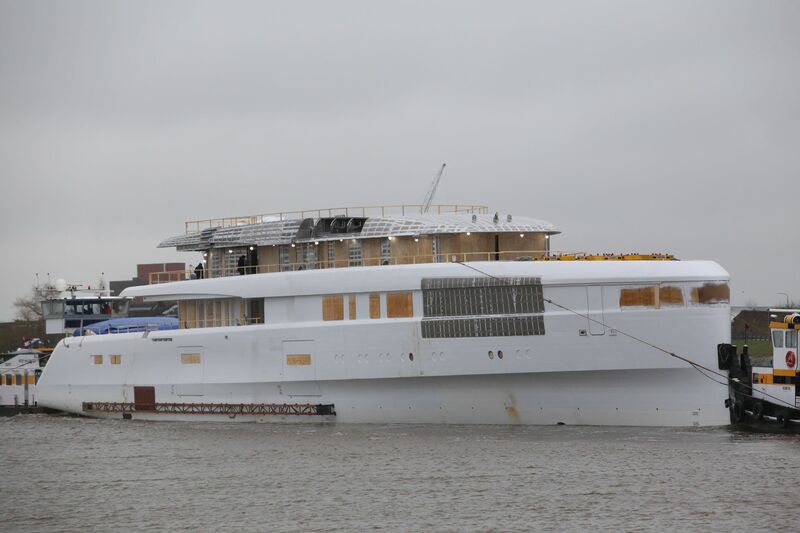 Designed by RWD, with naval architecture by De Voogt Naval Architects, the 84.2-metre Feadship 710 is expected to be launched in 2023. The yacht has been built with a steel hull and aluminium superstructure and has an expected volume of around 2,555 GT.

One of the most secretive yachts currently under construction, with neither renders nor images ever released of the superyacht is the 82-metre Lürssen Project 13775. Built from aluminium and steel, she is expected to have a volume of more than 2,000 GT. 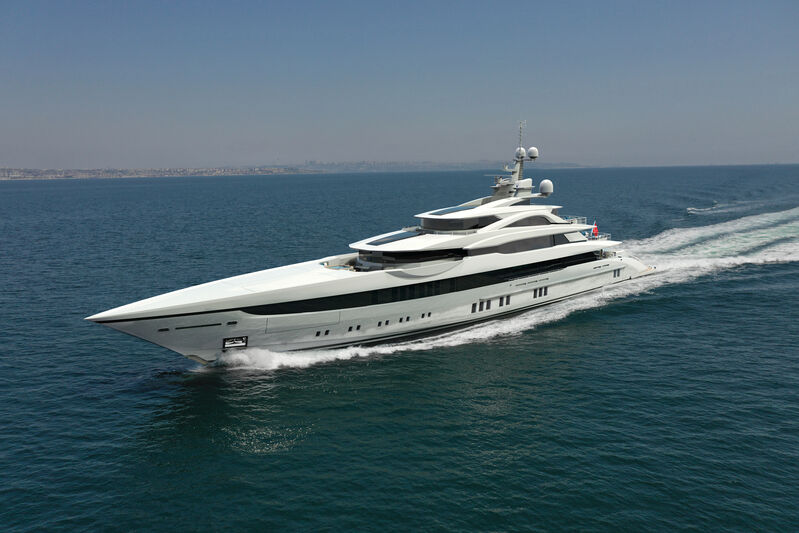 The Bilgin 263 series is Silence, the sale of which was announced in February 2022. She will offer as much as 20 percent more volume than her sisterships, in addition to a number of technical features which will create even more comfort when on the water. Her sistership Leona was launched in 2022, while Tatiana, will be built at the facility in Istanbul and will be launched in 2023. Unique Yacht Design has partnered with the shipyard for her naval architecture and exterior design, while H2 Yacht Design has penned her interior design and exterior living areas. 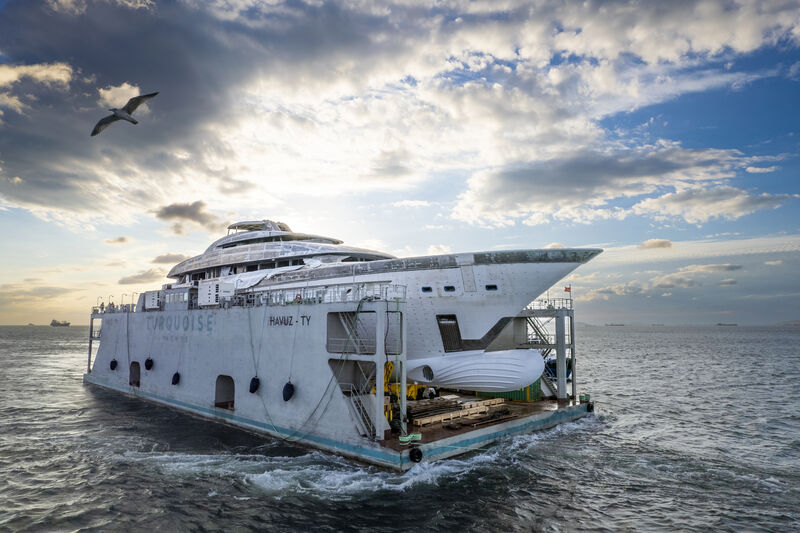 The 79-metre Turquoise superyacht Toro features both exterior and interior design from Harrison Eidsgaard Design. The superyacht will accommodate guests across seven staterooms and will be operated by a crew of 21. Her exterior is characterised by long flowing lines, which are currently still in development by her designer, and will feature an 8.5-metre pool. She will be constructed with a steel hull and aluminium superstructure. 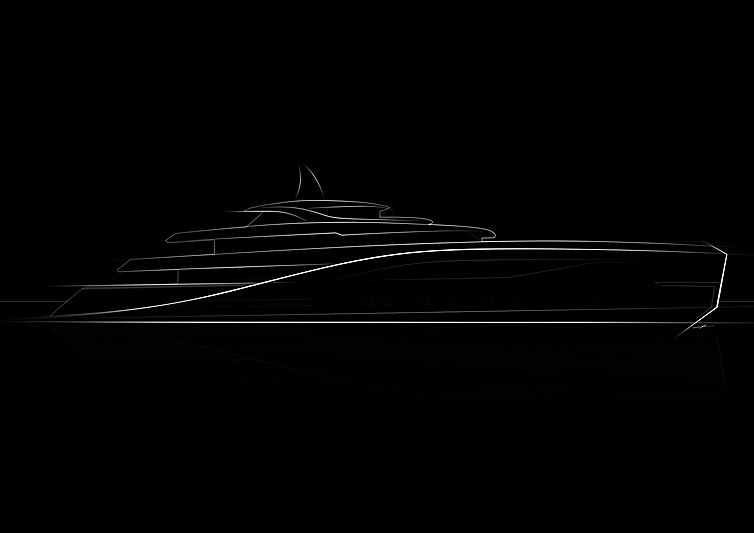 The third largest yacht currently under construction at the Italian shipyard Admiral is the 77.7-metre superyacht Blue Marlin. Her contract was signed in June 2020 and Sinot Yacht Architecture and Design was contracted to draw her exterior lines. The yacht features six staterooms spread out over three decks, with a full-beam master suite on the main deck forward, a special VIP suite on the bridge deck with an adjacent full-beam living area as well as four additional guest cabins on the lower deck. She features a diesel-electric propulsion system. 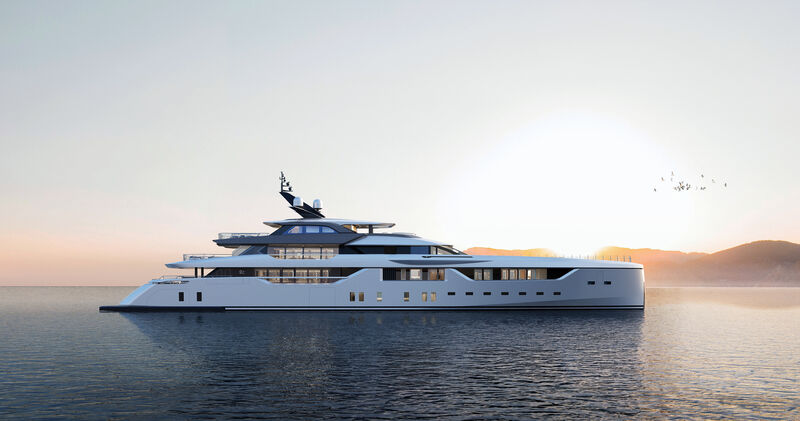 Currently under construction at the Greek shipyard Golden Yachts is the 77.7-metre superyacht O’Rea, which will be the latest of the shipyard’s superyachts to join the Golden Yachts charter fleet. Little is known about the design of the yacht, though she is known to have a steel hull and aluminium superstructure.

5 Steps to Become a Robotics Engineer

Wed Jan 4 , 2023
Robots are changing the way many businesses operate. As this trend continues, more companies will embrace robots, which means more demand for engineers to design and program them. Consequently, there’s never been a better time to pursue a career as a robotics engineer. Robotics engineers can enjoy a relatively high […]