I’ve always been a decorator. Once I had my own room as a child, it became a family joke that I tried to fit an entire house’s worth of decor into my modest space. I certainly took care with every element—in my teens I had a friend paint daisies on […]

I’ve always been a decorator. Once I had my own room as a child, it became a family joke that I tried to fit an entire house’s worth of decor into my modest space. I certainly took care with every element—in my teens I had a friend paint daisies on my wall, while I stenciled “Don’t you think that daisies are the friendliest flower?,” a quote from You’ve Got Mail.

At 29, when I set out to buy my first home in Eastern Washington, I knew what I wanted it to look like: lots of light, something with character, a fenced backyard so that I could get a dog, a kitchen with potential.

Finding my house was a little like falling in love, in the most cliched way. Even before I’d seen the whole thing, I was yelling down the stairs for my real estate agent to make an offer. The house had honey-colored wood floors, built-in china cupboards in the dining room, and one of those old telephone tables in the hall. Everything was bathed in natural light. I waited on tenterhooks until I was sure it could be mine.

I spent the next couple of years decorating—haunting my favorite consignment shops for midcentury modern pieces, taking my massive curved 1930s couch out of storage and lying at full length on its gray velvet surface. I’d pick up a 1950s floor lamp here, a secondhand stressless armchair there, a lucite chandelier on clearance. Once I had my tulip dining table with matching chairs, I could see that the house had come together.

I fell in love again, this time with the man who would become my husband. When he moved in, he brought mostly college-era furniture and hand-me-downs from his parents. His bachelor apartment hadn’t been a personality canvas so much as a place to sleep and watch Netflix. Though he occasionally had a strong reaction to my decor (he still doesn’t like my living room rug), for the most part he left the design decisions to me.

Then I got pregnant.

I’d been on the fence about having kids—I’d only just started saying “when” instead of “if”—and one of the reasons I’d wavered for so long was the stuff.

Design for children is mostly brightly colored and plastic, and nearly all of it lights up or makes noise. It’s the opposite of my carefully collected mix of modern and midcentury pieces.

I have a friend who works for a museum and sees decorating as another way to make art. She lives in a tiny apartment in Philadelphia that manages to look like a film set from a Nora Ephron movie. She is the sort of person who garnishes her cocktails on a weeknight. She was pregnant, too.

“Have you found any beautiful baby stuff?” I texted. “I’m drowning in primary colors.” She sent me her registry and told me to send her anything I found.

I’d been on the fence about having kids—I’d only just started saying “when” instead of “if”—and one of the reasons I’d wavered for so long was the stuff.

It turns out there are beautiful things for babies. Toys thoughtfully crafted with responsibly sourced wood and organic cotton, cribs that look like upscale vintage creations, highchairs that fit into a Scandinavian dining room, and strollers much sexier than my car. It’s also true that these are, for the most part, the most expensive baby items on the market.

Our baby is the first grandchild on both sides, and our families were generous as they awaited her arrival. My husband’s parents sent the crib; my parents bought a modern rocking chair in a classy gray. We began to transform my light-filled office into a light-filled nursery, complete with a heavy vintage dresser. My husband’s grandma bought the play gym with the sustainable wood and organic cotton, and I set it up and lay inside it.

By now I’d discovered Pinterest boards with inspiration for nurseries so beautiful they made me sigh, the same way I did at any other gorgeous interior. Never mind that there would likely be more bodily fluids present in this room. From Pinterest, I learned to hack an Ikea spice rack into a shelf and clothes rack, and picture ledges into hanging book racks, peppered with titles I remembered from my childhood.

Along the way, I collected pieces of our own history: quilts made by my husband’s grandma who had passed away, baby blankets given to me, their colors muted by time, just the perfect softness. I put up a piece of art I’d bought after college from a talented illustrator, and another original piece given to me by my brother. Now, looking around, I could see that my nursery fit in well with the rest of the house—it was decorated with my signature modern and midcentury flair, yes, but it also had soul. I had always loved finding pieces with a story, things that I knew would last and that made me happy whenever I looked at them.

In the next few months, I practically lived in the nursery, sometimes sleeping in the rocking chair for several hours in the night, covered by one of those lovingly stitched quilts. It’s still one of my favorite spaces in the house, managing to be both beautiful and functional (most of the time).

Most of my daughter’s toys aren’t plastic, but I know the time will come when we will have different ideas about decorating. Likely, she’ll want Frozen bedsheets or whatever this generation’s answer to the Tamagotchi turns out to be.

Near the beginning of my decorating journey, I stumbled across Deborah Needleman’s lovely book The Perfectly Imperfect Home. Nestled among illustrations so beautiful I want to live inside them is a piece of advice I filed away back when I was a single woman with only myself to accommodate. Under the heading “mollifiers,” she writes: “This is the stuff that you allow into your home because as awful as it may be, it makes someone else happy. … A really chic person can mollify because she puts love before style—and she can look at the offending items as amusing, or at least as part of the package.”

The nursery, I know, is mostly for me. By the time my daughter is old enough to care, it will seem babyish, ready for a refresh. When she begs for something that clashes with my ideas, I will offer other options, of course, but I hope to err on the side of helping her to embrace her own sense of style and creativity. I will take a deep breath and let it go.

Cara Strickland is an award-winning writer specializing in food and drink, relationships, books, and faith. Her work has appeared in the Washington Post, Salon, Southwest, Time Out, Atlas Obscura, JSTOR Daily, the Rumpus, and others. Connect with her at carastrickland.com.

Thu Apr 9 , 2020
Sometimes, having the right tools can help make the process of designing a logo or even a brand much easier and with this list of the top Logo & Branding Kits for designers, you can have the tools you need to produce high-quality work every time. With so many different […] 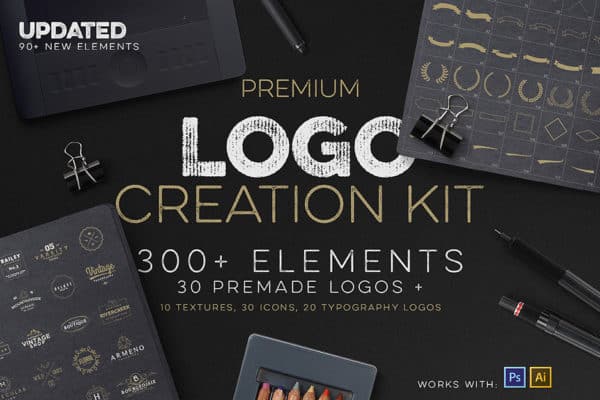