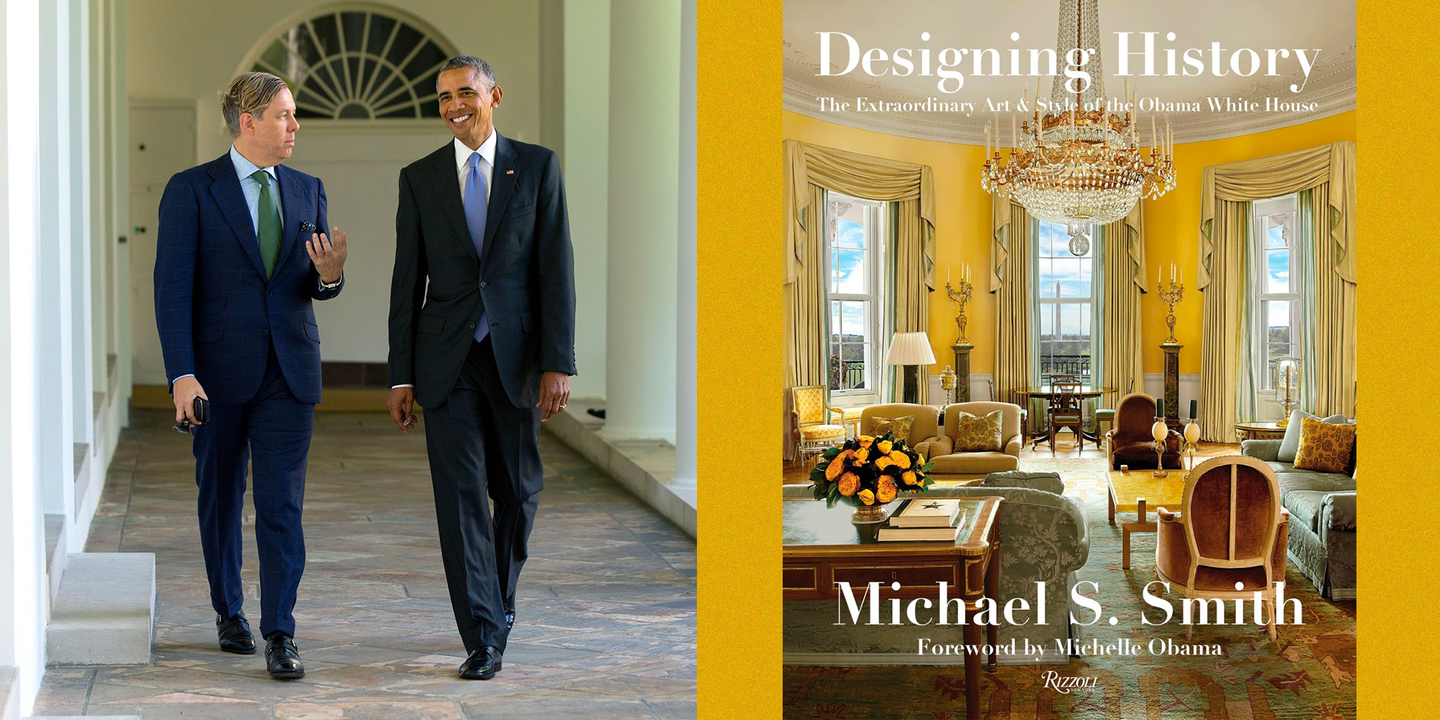 Holding the position for all eight years of the Obama era, Smith was instrumental in turning a historic building with notoriously curved walls and high, drafty ceilings into a home that was comfortable, and representative of the administration’s values.

Coincidentally, in 2009, Smith was also physically in the room where Lin Manuel Miranda performed a viral rap from the perspective of Alexander Hamilton, which would go on to become the smash musical that originated the line, “The room where it happened.”

Smith’s joke works on many levels, as does the title of his new book, Designing History: The Extraordinary Art & Style of the Obama White House, written with Margaret Russell and with a forward by Michelle Obama. Smith’s modern designs for the White House made history, just as the Obamas’ presence was, in itself, trailblazing. Further, all changes to the White House’s private residences were added to the 250-year-long history in every room—a place where layers of wallpaper tell a story of past administrations. What would the Obamas’ mark be?

“What was interesting to me was the Obamas in the White House, not the White House in a vacuum. It was how these two things combined to be something stronger and better,” Smith says.

Released in September, the gorgeous coffee table-meets-history book depicts the rooms where the Obamas ate, slept, and worked for the very first time. Until now, most of the rooms in Designing History weren’t for public consumption, but for private reconstitution.

“We’re so tough on our leaders. There’s so much pressure and lack of privacy. I always factored in how to make it restorative,” Smith says. “It was three-dimensional chess. I was constantly trying to think of how the experience would feel and smell, as an immersion.”

While turning the color-saturated pages, it’s possible to imagine the Obamas’ domestic lives play out in these pristine and vibrant spaces, scenes the news never caught. The blue dining room where the family gathered for nightly dinner around 6:30, give or take a national emergency. The salmon-hued office where Mrs. Obama got the job done. The place where the president rested his head.

But those rooms didn’t come together overnight. Designing History unpacks the arduous path to those gorgeous interiors, from Smith receiving a pivotal call from the Obama administration while on a Caribbean vacation, to the time-crunch of inauguration day (or, for Smith, move-in day).

Smith got the gig of a lifetime thanks to, well, a lifetime of work as a high-profile designer, with clients like Steven Spielberg and Shonda Rimes—and one very special letter of recommendation. Katherine Chez Malkin—Smith’s friend and a well-connected force in Chicago real estate—advocated for him to an Obama insider with a sharply worded letter reproduced in the book. (“He is a genius,” the letter reads.)

In November 2008, Smith flew to Chicago to meet the young family on the cusp of change. Smith says the job interview wasn’t so much a series of questions, but an instinctive decision, based on trust and personality fit.

“I’m a tiny piece of the idea that there were no scandals in the Obama White House. That says volumes about the people who are making the decisions, the people who are being empowered to go into the world and operate and create—whether it’s policy or a chair. You have to trust and know those people are going to represent you and the country well,” Smith reflects.

Once he got the job, he had to do the job—another challenge entirely. Smith took a deep-dive in to the history of the White House, recreated in the book; book-marked the website, and interviewed Nancy Reagan for her insights.

Using only floor plans and photos to prepare, Smith orchestrated the initial transformation of the White House’s private quarters on move-in day, adding touches like patterned bedspreads for the girls’ rooms and meaningful pieces of modern art. “They were evocative of a fresh, new set of voices for the transitionally antiques-filled room,” the book reads. Smith would go on to champion the work of living artists from all backgrounds, ensuring the White House’s walls were reflective of America’s diversity.

Smith, that day, was struck by the size of the rooms—which couldn’t be conveyed in photos. “I wanted to bring the scale [of the rooms] down. It would be like sleeping in a basketball court. I wanted to make it manageable and humanist,” he says.

Another touch? Smith was sure to swap out the Bush’s bed, so that the new POTUS and FLOTUS could have a space that was theirs. “It felt so weird that they would sleep in George Bush’s bed—not because there’s anything wrong with that. But the fact that this new world and a new beginning. We made it their own space. Not just literally but in a symbolic way,” Smith says.

Smith was highly aware of how these rooms affected the president and first lady’s psychological states, and ultimately their ability to do their jobs—which is why he set out to give the Obamas a sublime sleeping experience.

On their first night in the White House, the Obamas slept on “the world’s most comfortable sheets,” with fresh gardenias nearby. “For some weird reason I thought they might give him a sense of calm because they’d smell like Hawaii,” Smith says. Later, the Obamas upgraded to a canopy bed, per Smith’s recommendation. “You want a president who sleeps well, don’t ya?”

A year after Inauguration Day, the Obamas were settled enough to start on the more intensive renovations, the final stages of which are depicted in Designing History. Congress allocates $100,000 to the renovation, but the Obamas chose to spend their own money on the overhaul, which amounted to $1.2 million. (Public rooms are refurbished through donations and funding from the White House Historical Association).

Some of Smith’s renovations were already public, including the Oval Office, unveiled in 2010. “Bush’s room says, ‘Let’s have a glass of sherry while we sign the treaty.’ Obama’s room says, ‘This is serious. We don’t have time to waste. Double espresso, anyone?” writer Sally Quinn said of Smith’s designs, which included tan wallpaper, red curtains, and a rug inscribed with quotes from past presidents.

As he describes in the book, Smith had to fight for those red curtains. Smith believed red was emblematic of “strength of purpose” and “heroism,” and echoed back to the red in Washington and Lincoln’s portraits. President Obama and his advisors, however, were not convinced—some liked blue, others white, and some gold (the color President Trump has).

“People who are close to the president know that he respects a difference of opinion. He almost seeks it out. He’s not someone who respects someone who agrees with him all the time,” Smith says of standing up to President Obama. “He respects someone who holds their ground and believes in their story. That’s something I learned right away.”

And then, there were the apples. Smith insisted on keeping a bowl of apples stocked on the center of the room (Honey-crisp and Golden Delicious were the president’s favorite). “Not only were they healthy, but the bowl was beautiful, the gesture was welcoming, and there was a sense of utility to it. It reflected the Obama mindset,” the book reads.

The small touch is representative of Smith’s ethos, which permeates the book: Just as the White House is both dwelling and an idea, every object had a function and a symbolic meaning. “You’d have an idea and it’d take on its own life. You realize the power of the president. Each decision felt weighty and important,” Smith says.

Take that meticulous mindset, apply it to 132 rooms, and then you’ll grasp the enormity of the Smith’s task: Every single object mattered—and every object could create controversy. “You never want to make news. That’s your number one job. Make no news,” Smith says.

The level of detail makes for a fascinating read, each page potentially studied with the joyful intensity of a Where’s Waldo book. Malia and Sasha’s rooms, which were Smith’s “first order of business,” were particularly charming. A break from the White House’s stateliness, the girls’ rooms were decorated with colorful patterns and whimsical chandeliers from South Africa’s Magpie At Collective.

Smith spoke to Malia, then 10, and Sasha, 7, to fashion their distinctive rooms—Malia’s, with dusty blue wallpaper, and Sasha’s with bubblegum pink. “I got a sense just by talking to them, even though they were little children, they were then and they were now very individual. Wonderful, but very distinctive personalities and points of view,” Smith says.

Soon after the Obamas settled, Smith got a call asking to bring in alarm clocks for Sasha and Malia’s rooms. Apparently, the Obama girls learned they could request wake up calls from the White House operator. “Their mother appropriately felt the calls might be a distraction for the staff,” Smith wrote, adding she felt that “her daughters needed to know how to function in the real world.” Malia and Sasha also were responsible for their laundry and making their beds.

Through the redesign, Smith became especially close to Mrs. Obama, his collaborator-in-chief. “She’s such a wonderful person. She is so easy-going, honestly—often she was so gracious in saying yes to things that I had to sometimes say, Are you sure you don’t want it to be bluer? She trusts my opinion on things with decorating. I doubly am cautious and thoughtful with my choices because I’d never want to do something that was less than my best for her,” Smith says.

Over the course of those eight years of constant work, Smith became friends with that family he first met in Chicago in 2008. When the Obamas left the White House for the last time in 2017, Smith and his husband, James Costos (whom the President appointed to serve as the United States Ambassador to Spain and Andorra in 2013), were on the private jet to bring them to their new home in California.

“When people ask, ‘Are you so sad that you had to leave the White House?’ No, because I took the important things with me—them!” Smith says, referring to his friendship with the Obamas.

Smith may never decorate the White House again, but his eyes remain fixed on the building—not necessarily for the designs, but what those designs represent. He contrasts the image of Malia and Sasha playing with their dogs, Bo and Sunny, on the front lawn with the high fence that currently defines the White House.

“The White House is reflective of the moment and the residents more than it’s a building. It’s a river of history. It’s constantly moving and adapting and changing. It can become an optimistic, uplifting place in the blink of an eye,” Smith says.

Despite swimming through a “river of history” for eight years, Smith says his White House experience remained haunting-free. “I never saw a ghost. It would seem like there’s so much personality and dynamics that there’s not a lot of room for other forces,” he says.

For more ways to live your best life plus all things Oprah, sign up for our newsletter!