From the front, 5540 Dunmoyle St. looks like any of the grand Pittsburgh homes that line one of Squirrel Hill’s prettiest streets, but inside is a whole different story — literally.  Built in 1939, the renovated five-bedroom, 5½-bathroom home has a spectacularly modern two-story addition. Pittsburgh-based architectural firm Indovina & […] 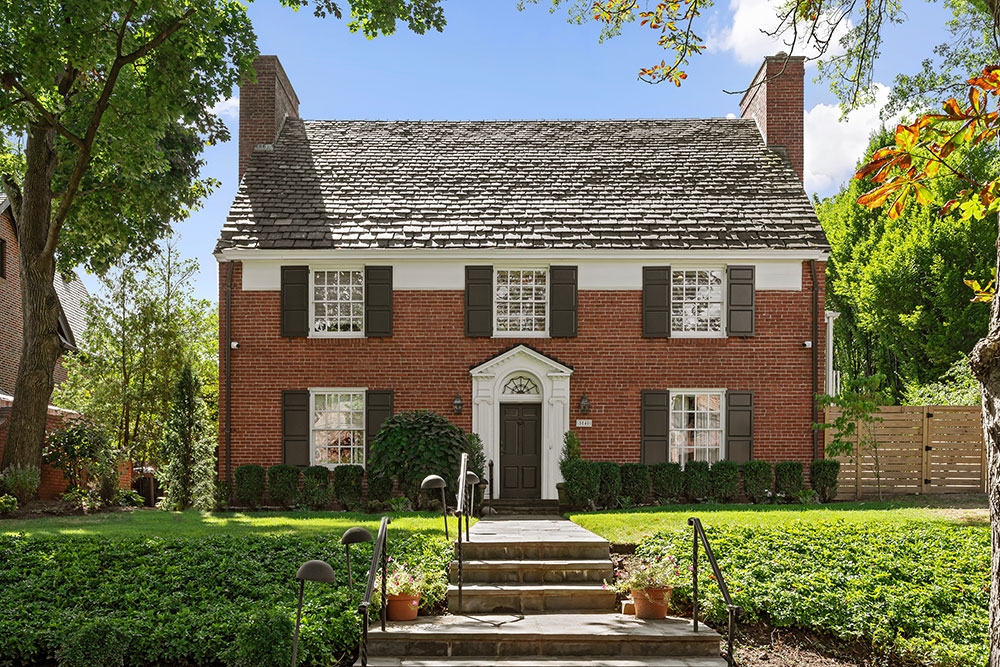 From the front, 5540 Dunmoyle St. looks like any of the grand Pittsburgh homes that line one of Squirrel Hill’s prettiest streets, but inside is a whole different story — literally. 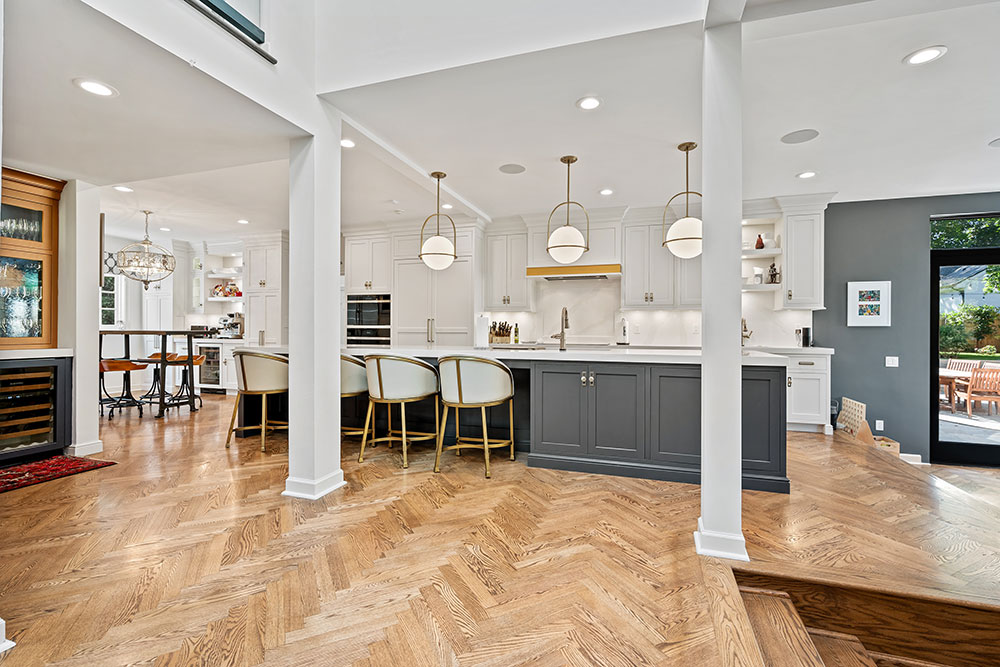 Now empty nesters, the homeowners (who asked to remain anonymous) have decided to put the home on the market. It is listed for $2.95 million (MLS# 1574880, Cindy Ingram and Ken Clever, Coldwell Banker Real Estate, 412-818-5810, coldwellbanker.com).

After learning about the house from the former owner during a business lunch, the homeowners lived there for 15 years; The house was brought up during the meeting as an afterthought, according to the homeowner.

“I had remarried, and my wife brought four children into the marriage and we needed the room,” he says. “Before you knew it, the house had changed hands.” 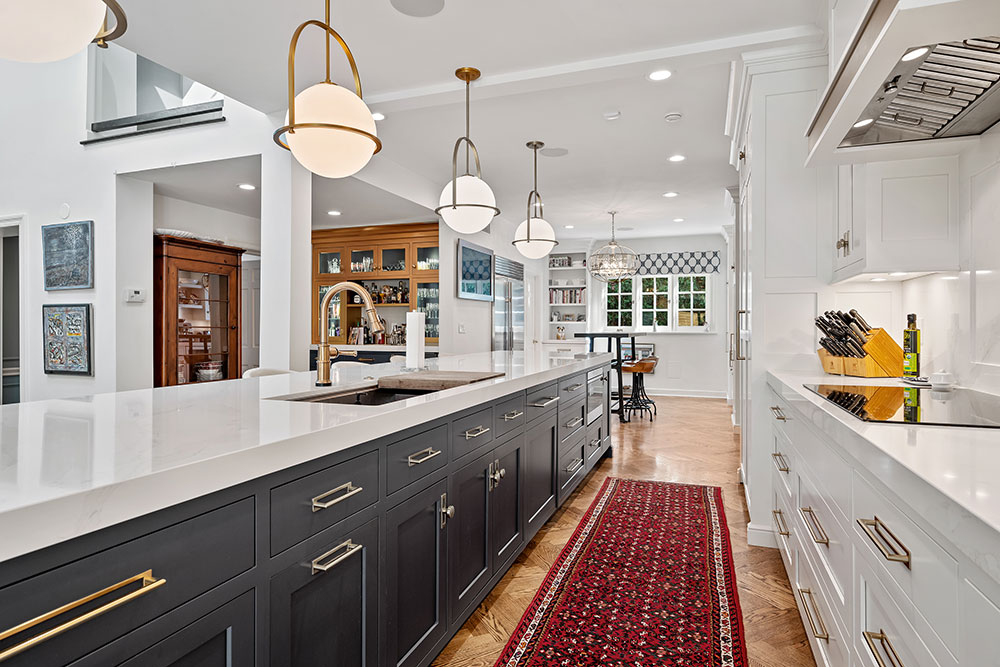 Situated on a flat lot, the home’s all-brick exterior has a nice stone retaining wall and all the classic touches expected of a center-hall, Colonial-style home. It’s also located just a few blocks from Shadyside’s shops and restaurants on trendy Walnut Street.

Inside, the light-filled home contains the original hardwood floors alongside clean white walls that allow the colorful artwork to pop.

To the right, the formal living room features a mix of classic and modern furniture. The original fireplace and elegant crown molding plays nicely against the more contemporary black-and-glass accordion doors leading into the spacious addition. 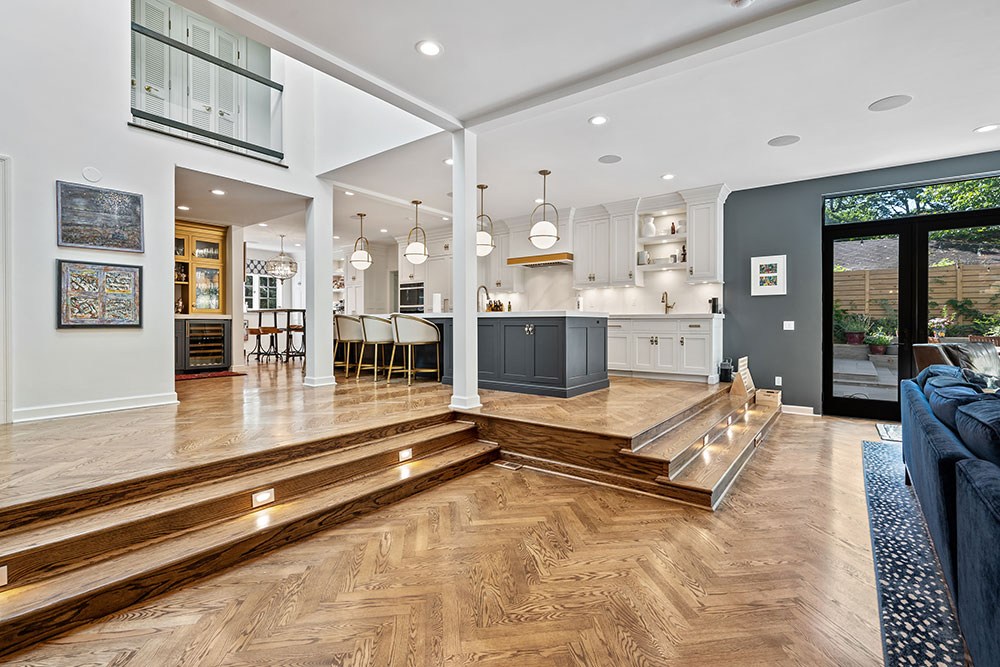 To the left is a study that was well-used by the owner, who is an avid reader. Shortly after moving in, he had custom bookshelves installed in the room. The backs of the shelves are painted a deep merlot, creating a lovely backdrop for his expansive book collection.

“I designed them because I needed a place for my books,” he says. 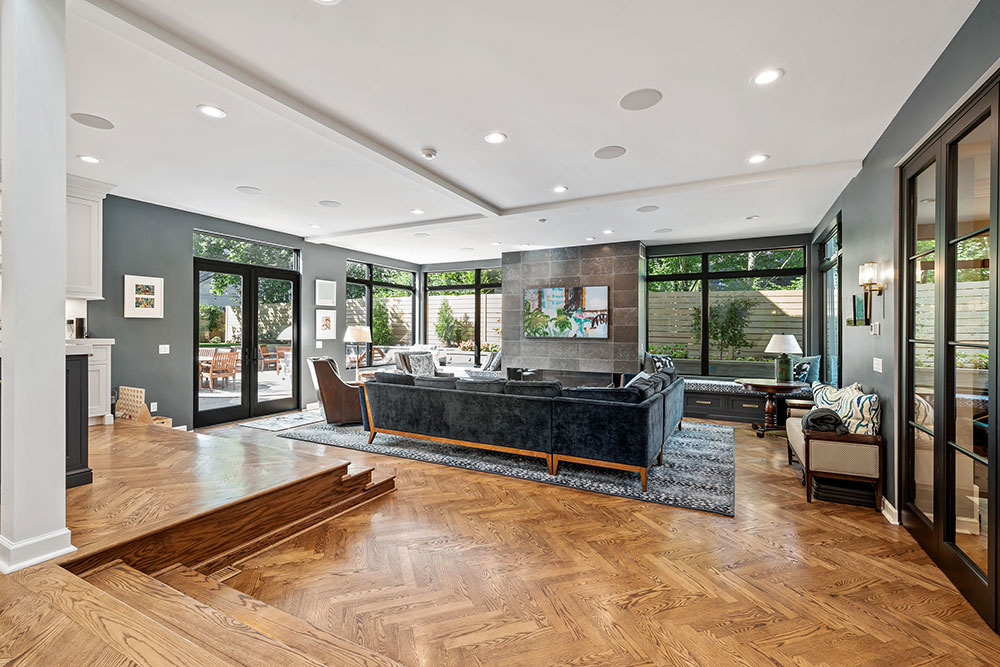 Heading to the rear of the home, the expanded kitchen is a chef’s delight. Measuring 34-by-19 square feet, the new layout has a mix of bespoke custom cabinetry in natural, wood and gray finishes.

Anchoring it is a 12-foot-long island topped by quartz countertops that has room for storage, seating and entertaining. On the working end of the island is a large galley sink with brass fixtures and built-in appliances by Wolf/Subzero. Suspended brass-and-glass globe pendants add to the beautiful lighting scheme. There’s also a second, bar-height mobile island that sits in front of a window, alongside bookshelves that house a cookbook collection.

“We used John from Acclaimed Kitchens for this space, Crescent Supply for the appliances and Jones Stone and Marble for the countertops,” the homeowner says.

The custom bar area has glass-front cabinets and a built-in beverage refrigerator. The kitchen also features two dishwashers as well as a pair of commercial-grade refrigerators. 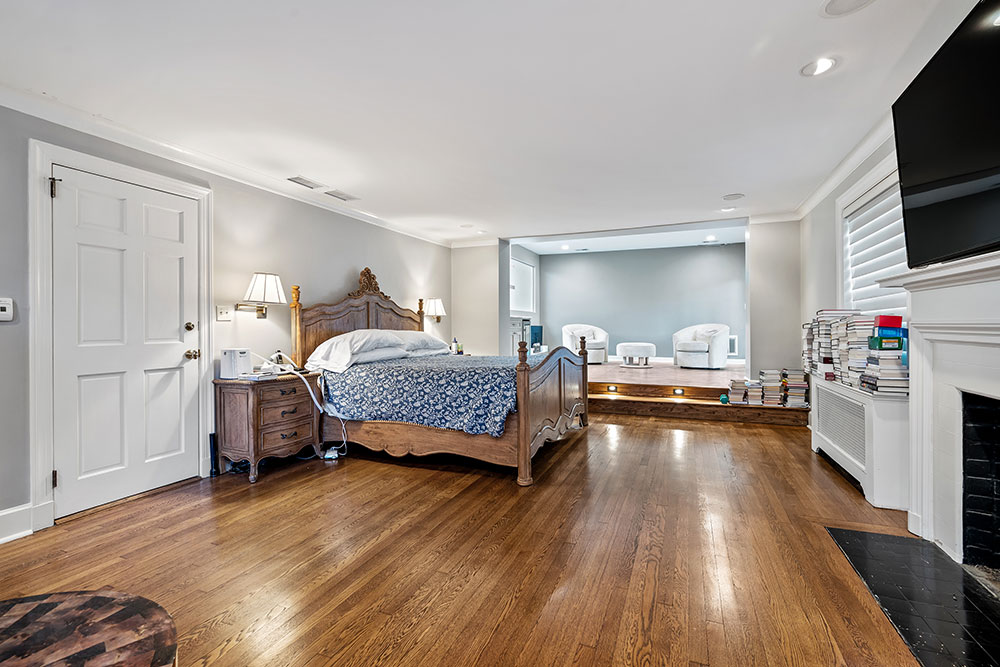 Hardwood floors were installed in a herringbone pattern, and the entire space opens to the new sunken great room, where a wall of windows with seating is anchored by a floor-to-ceiling fireplace.

Above the great room is a small second-floor apartment, plus a reconfigured space that flipped a smaller bedroom into a dressing room for the primary suite. 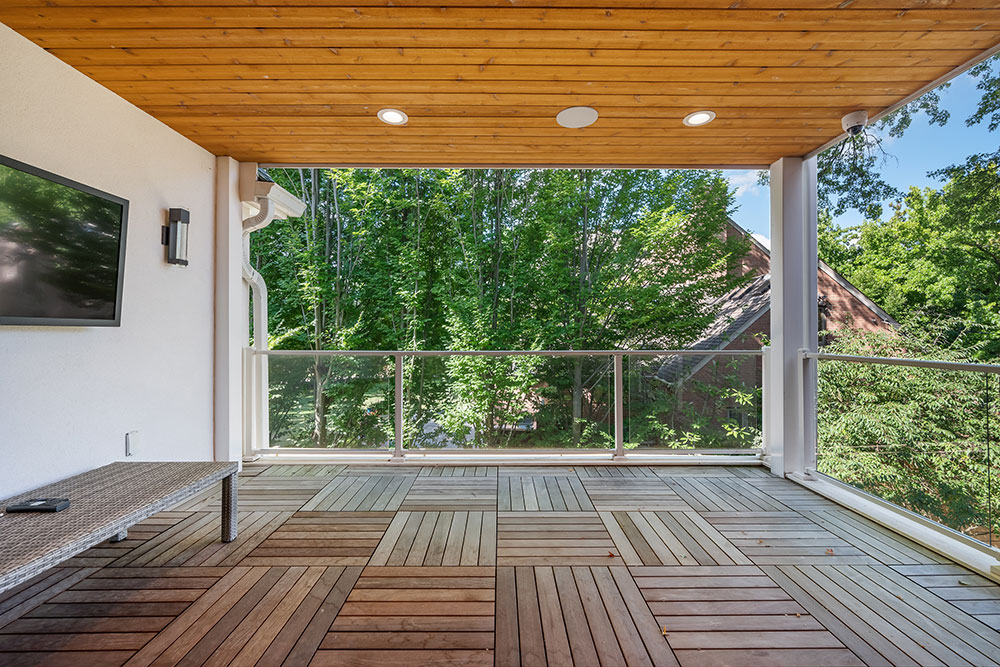 One of five bedrooms, the primary suite has hardwood floors, a fireplace and large windows, alongside a sitting area featuring a small bar and refrigerator.

The technology-laden space, installed by Listen Here, includes a television monitor built into the ceiling. The custom dressing room has a mix of closed and open cabinets with glass-front doors.

There are also two laundry rooms; one is adjacent to a second-floor office and the other is in the renovated basement, where the homeowner’s wife runs a small business. 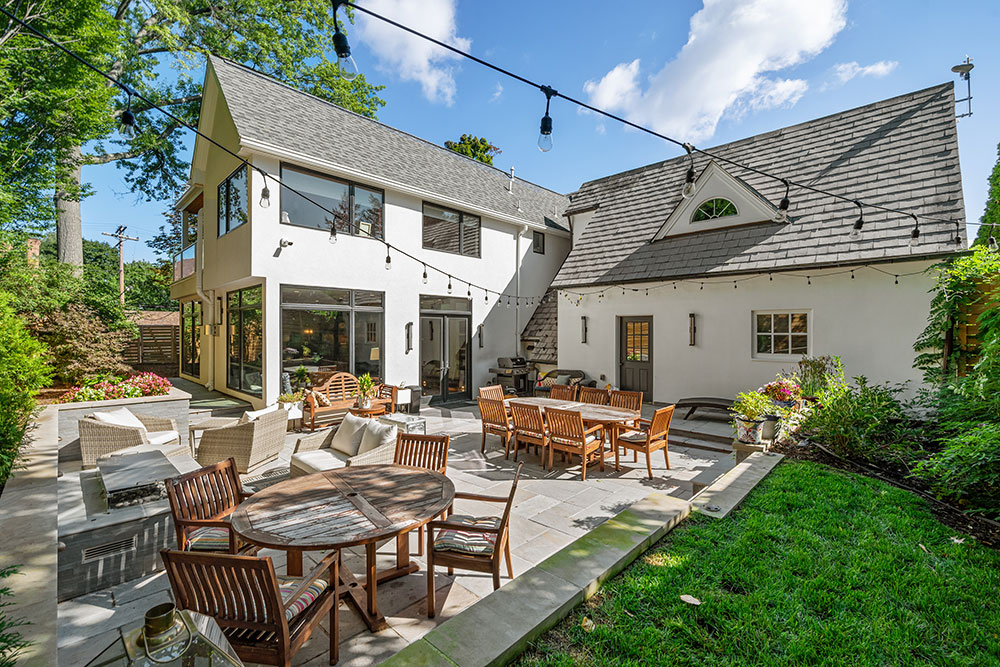 Outside, the all-new hardscape has stone planting boxes and a patio.

“I designed it myself,” the homeowner says. “We installed a porcelain tile that will weather nicely and looks like bluestone.”

Installed two years ago, the perimeter fence has horizontal boards for a modern look. The 95-by-125-square-foot lot also includes a three-car garage.

Although the house is well-loved, the homeowner, admitting to being melancholy about the sale, says it is too large for two people.

“The thing about this house? It has a great personality to it,” he says. “When the twins were younger they would say, ‘Even the upstairs has an upstairs.’ The neighborhood is now full of lots of kids and families again. It’s nice.”

Hot Property is an inside look into unique and historic homes on the market. Each week, Hot Property goes behind the For Sale sign to share the story of a special Pittsburgh-area home. And four times a year, Hot Property gives an in-depth look at the region’s real estate market in Pittsburgh Magazine HOME, tracking housing prices and sales and detailing where the hot properties can be found. Rosa can be reached at [email protected].

About: Squirrel Hill, Pittsburgh (shuc.org)
Population: 26,473
Planes, Trains & Automobiles: A 30-minute commute to the airport. Daily transport via Pittsburgh Regional Transport, rideshare and bike lanes. Ample street parking.
Schools:  City of Pittsburgh (pghschools.org)
Neighborhoods: Although situated in Squirrel Hill, this home is a stone’s throw from Fifth Avenue and the Shadyside neighborhood. Both neighborhoods have lively business districts, packed with restaurants, shops and other businesses. Squirrel Hill’s Forbes Avenue also includes a branch of the Carnegie Library as well as the sprawling Jewish Community Center. 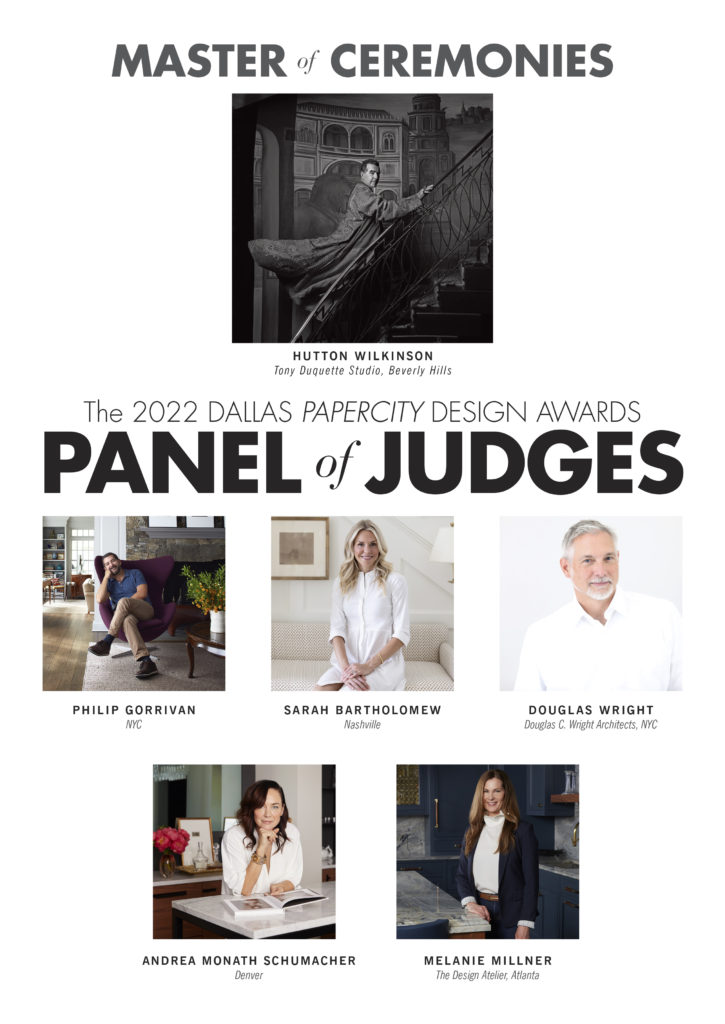