For 30 years, the stucco-like appearance of Exterior Insulating and Finish Systems (EIFS) has given commercial buildings high curb appeal, broad design and color flexibility; low maintenance and durability; and increased energy efficiency. In more recent years, the residential marketplace has begun enjoying the benefits of EIFS, as well. However, […]

For 30 years, the stucco-like appearance of Exterior Insulating and Finish Systems (EIFS) has given commercial buildings high curb appeal, broad design and color flexibility; low maintenance and durability; and increased energy efficiency. In more recent years, the residential marketplace has begun enjoying the benefits of EIFS, as well. However, in some residential applications, there had been a problem.

Moisture that had passed through windows and door openings was trapped behind the EIFS exterior; in some cases the moisture caused rotting of wall studs and sheathing. The problem was summarized in the New York Times article, “Some Users of Artificial Stucco Find Headaches Are Real.” The article states, “The trouble is that EIFS are too waterproof. Water that gets trapped behind [the EIFS exterior] has nowhere to go and begins soaking into studs or plywood sheathing.”

For this reason many EIFS manufacturers have innovated moisture-mitigation systems that effectively prevent moisture buildup on the rare occasions that moisture makes its way behind the EIFS exterior.

A traditional EIFS exterior wall is comprised of EPS foam, fiberglass mesh and a cement-like stucco material. The first step in creating an EIFS exterior is to glue a layer of EPS foam directly onto the sheathing of a house or commercial building. Then, a base-coat of cement is applied, followed by fiberglass mesh and a finish coat of cement. This type of system is called a face-sealed barrier EIFS. It resists water penetration at its outer surface.

“Rainwater and wind-driven rain can work their way past the acrylic polymer coating and the foam insulation glued directly to the wood framing and sheathing members of your EIFS-clad house,” says Tim Carter, who writes the nationally syndicated “Ask The Builder” column. “Once the water becomes trapped between the wood sheathing and the foam insulation, rot problems begin.”

Such problems were the subject of a news story aired April 1999 by NBC’s “Dateline.” The report tested three EIFS-clad homes in North Carolina and found that all three had trapped moisture. But according to Stephan Klamke, executive director of the EIFS Industry Members Association (EIMA), the “Dateline” report overstated the moisture problems and their cause.

“In the instances where moisture problems did occur [with EIFS], poor quality construction practices and sub-par materials were the cause,” said Klamke in a written editorial response to the “Dateline” report. “Dateline led viewers to believe that the entire wall surface of an EIFS home is likely to experience moisture damage, when, in fact, moisture damage is almost always limited to areas directly adjacent to or under windows.”

Following a similar “flashing and weep hole” strategy used in brick construction, EIFS manufacturers have redesigned EIFS to allow for moisture run-off. Here’s how the EIFS moisture-mitigation process works for most manufacturers:

According to the June 1999 issue of Professional Builder, comprehensive testing conducted by the National Research Council Canada and USG Corporation supported the EIFS water-mitigation system as an effective means to prevent moisture buildup:

“If you install a new water managed drainable EIFS system on your new home according to manufacturer’s specifications,” he writes, “you should have no water problems.”

Because the EIFS industry has modified EIFS to prevent potential moisture problems, the benefits of EIFS can be enjoyed without concern of potential moisture problems. For more information on using EIFS-clad exteriors, the National Association of Home Builders Research Center offers two publications: “Quality Plan for the Installation of EIFS” and “Before You Use EIFS.” Both can be obtained by calling NAHB’s Homebase Hotline at 800-898-2842.

The primary reason has to do with quality. Because commercial applications generally employ higher-quality construction practices and workmanship than residential buildings and use higher quality windows, moisture repair problems are almost non-existent in EIFS-clad commercial projects.

The other reason according to Carter is, “In commercial construction, the EIFS material was originally applied over concrete block or masonry structures and to buildings that were built using steel or other non-wood products.” These materials do not absorb moisture.

How Painting Wood Paneling Will Change Your Life

Mon May 11 , 2020
There is simply no reason you must live perpetually with a dated wood kitchen if you don’t want to. Or live in a dark, wood-paneled den just because your home contains one.  And, no, you don’t have to rip the wood paneling out. Pull Up a Comfy Chair and Read […] 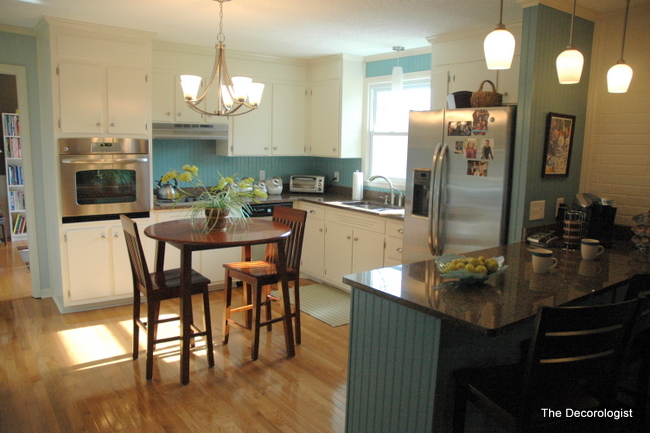