Photo: Quibi When Quibi launched earlier this week, it did so with several big-swing, big-money shows, including Flipped, an HGTV-infused comedy starring Will Forte, Kaitlin Olson, Arturo Castro, and more. As Jann, the show’s eccentric, self-absorbed protagonist, Forte once again plays the character you want to root for, but also […]

When Quibi launched earlier this week, it did so with several big-swing, big-money shows, including Flipped, an HGTV-infused comedy starring Will Forte, Kaitlin Olson, Arturo Castro, and more. As Jann, the show’s eccentric, self-absorbed protagonist, Forte once again plays the character you want to root for, but also would absolutely hate to be around. He’s not so much an antihero as a complete shithead, but one that still probably doesn’t deserve what he gets in the show—which is kidnapped by drug traffickers and forced to design and renovate their massive, tacky homes. The A.V. Club talked to Forte about his own design aesthetic prior to the Quibi launch, as well as the future of the MacGruber streaming show, and his delightful new puppy.

The A.V. Club: Prior to Flipped, how familiar were you with the home renovation genre?

Will Forte: I had such little knowledge of the genre. I really had not seen any until I was in New Zealand last summer. I was down there working on something for a couple of months and there were so many of these shows on TV. I found myself really getting sucked into them. I don’t even know the names of the people I was watching, but it was so fun to watch, and I got really into it. So then months and months later when I finally found out about Flipped, it was a no-brainer.

AVC: Was it always pitched to you as a Quibi show, with each set-up being a different episode?

WF: I wasn’t part of it until it was a Quibi show. I don’t know what their journey was with it but by the time they came to me it was already on Quibi, and they had written the whole series. I happen to know the two guys who created it and wrote it, Damon Jones and Steve Mallory, so I already had that connection going. Once I read the script, it just seemed like a no brainer. Just every part of it felt like it would be a really fun thing to do.

AVC: Is there anything different about filming a Quibi show, or is it just like doing the scenes between commercials on a 30-minute sitcom? Like each scene just has to end with a scripted beat?

WF: It really seemed like just a regular show that you would do. It kind of felt in a way like a movie, but since you’re doing per episode it also felt like it could just be a TV show with slightly more cliffhangers than you would normally have. When you’re writing a TV show, if you’re doing three acts in a TV show, you want each act to end with something that gets people coming back after the commercial break. It’s essentially just amping up those act breaks and turning them into cliffhangers. And these guys did an amazing job of ending each episode on something tantalizing that an audience would want to come back and see how it’s resolved.

AVC: When we meet your character, Jann, he’s directing a children’s musical about the Triangle Shirtwaist Factory fire. How much of Jann’s backstory did you have in mind? Do you have a sense of how Jann became Jann?

WF: Steve and Damon know a lot more of this stuff than me. The way that they had written the character, it seemed pretty obvious what they were looking for, so I didn’t really go back and create a huge backstory. Don’t tell my old drama teachers. Actually, the only real acting teacher I’ve had is a guy named Mr. Eggertson so maybe he’s rolling in his grave. Actually, Mr. Eggertson is probably still alive, so maybe just don’t tell Mr. Eggertson.

Anyway, these guys just did such a great job of writing all the different characters. And I had so much fun watching Kaitlin Olson and Arturo Castro and basically everybody else who was in the cast do their stuff, just because they had such fun dialogue to do. I mean, those two could make anything fun, but armed with amazing dialogue, it was just incredibly fun to get to watch.

AVC: it does seem lucky that Jann and Olson’s character Cricket found each other.

WF: I don’t know that Jann or Cricket have another match out there in the world, so they are very lucky to have found each other.

AVC: What’s your personal design aesthetic like? Are you into open concept living? Would you be cool with an antler chandelier? What’s your vibe?

WF: I don’t know if I have a specific vibe I like. I go back and forth all the time on different design positives and negatives. It drives my fiancé crazy because she can never really guess how I’m gonna feel about any piece of furniture. I could hate this beautiful designer couch that 999 people out of 1,000 would go nuts over, and then I could love this macrame thing of a platypus or something and want to make that the focal point of a room. I don’t trust my own taste. That’s why I try not to make any fashion choices, or design choices.

AVC: Is there anything that you absolutely hate in a house? Like pillows that have words on them, or wood paneling?

I don’t love dead animals on the wall so much. I just went on a safari last year and I was already not a fan of killing animals for sport—when you see those beautiful huge creatures, it made me even more mad. So, yeah, if I went in and I saw a rhino head on a wall above a fireplace, I’d probably torch it.

AVC: What are you doing to pass the time while we’re all stuck at home? Do you have a “Gary” yet, like on Last Man On Earth?

WF: I wish that I was spending this time writing, but it’s really hard to get my mind off the state of the world right now. So it’s tough not to just be watching the news.

I guess the one nice thing in this whole nightmare of a scenario is that we went and got a puppy, and so we’ve been potty training the puppy, and it’s been a little delight. It’s a nice distraction from what’s going on.

I’m mainly just spending this time thinking about all the people who are going through stuff. It’s awful. My heart goes out to everyone who’s going through something, which is everyone.

AVC: This past weekend was supposed to be the MacGruber anniversary screening in L.A. Are you planning on rescheduling that? And what’s going on with the MacGruber series on Peacock?

WF: I have no idea. I definitely do know that we plan to reschedule the movie screening that we were gonna do, which we were really excited about. It was obviously a no-brainer to cancel it, but yes we plan to do it at some point in the future.

I’m hoping we still get a chance to make the [MacGruber] show. It was looking real good before everything in the world got put on hold, but we’ll see how this all affects everything.

AVC: It’s hard to know how tomorrow will be different from today, so we can’t even imagine what it will be like weeks from now.

Sat Apr 11 , 2020
Transitional décor is a décor theme that merges a couple of styles together to create a beautiful décor style in your home. No matter what room, you can bring the décor style of contemporary and modern together and design a room that is not either, too formal or elaborate, but […] 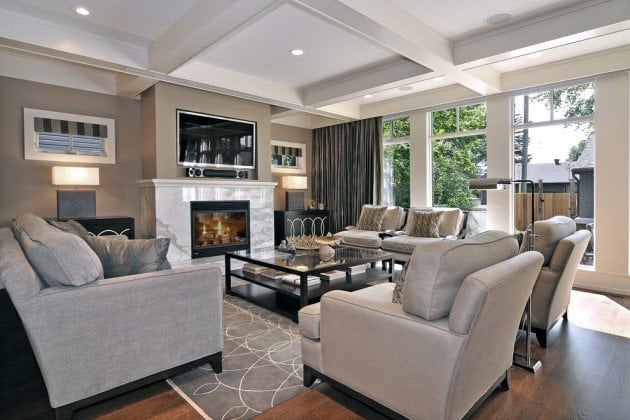