The concept of radically revamping houses has spawned a raft of TV makeover shows, but can you achieve a similar transformation with a flat? Opportunities may seem much more limited with a flat for moving rooms and creating a totally different feel, but this two-bedroom home in London’s fashionable Notting […]

The concept of radically revamping houses has spawned a raft of TV makeover shows, but can you achieve a similar transformation with a flat?

Opportunities may seem much more limited with a flat for moving rooms and creating a totally different feel, but this two-bedroom home in London’s fashionable Notting Hill provides inspiration for what can be achieved.

The flat has been transformed with the help of a rejigged floor plan, five colours from fashionable paint maker Little Greene that were picked by an interior designer, and a one-off light created by the owner.

And it is hardly recognisable as the original flat. A compromised layout has been replaced by an open-plan kitchen, dining area and lounge, and two freshly-designed bedrooms that cleverly combine en-suite bathrooms with all-important storage space. 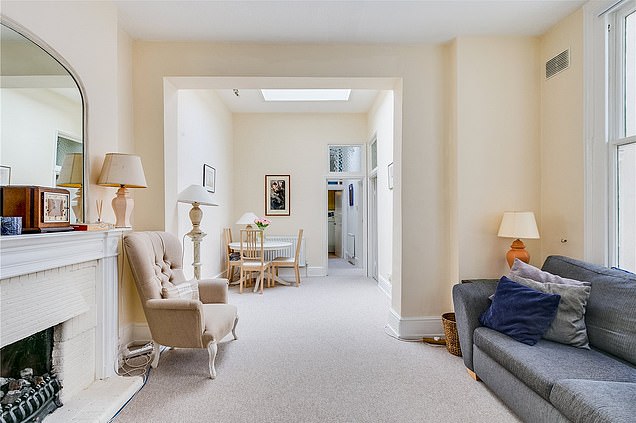 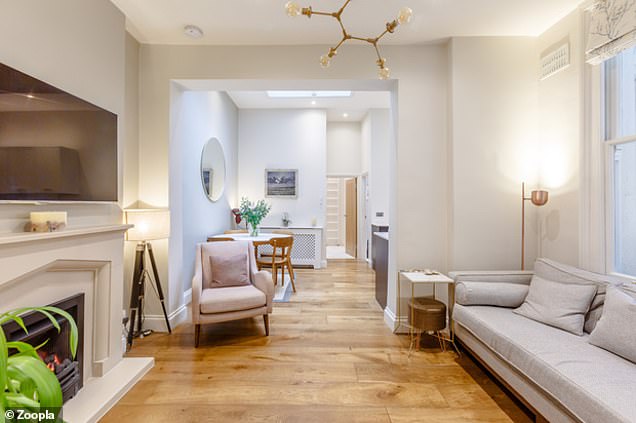 A new look: This two-bed flat in London’s fashionable Notting Hill has been transformed from run-of-the-mill to stylish

The flat is now for sale with a £900,000 asking price, as owner Ben Farrow needs to move out of London. He says that he won’t make any money from the sale after renovation and moving costs, but the new owners will get a stunning new interior crafted to make it the best possible living space.

He declined to reveal exactly how much he had spent on the renovation project, but said: ‘It would definitely have been possible to have done it for less should that have been the objective, but it was about building a nice home, not about bottom lines and profit margins.’

There has been a significant amount of work done on the flat, from walls being moved, to new flooring and paint colours. 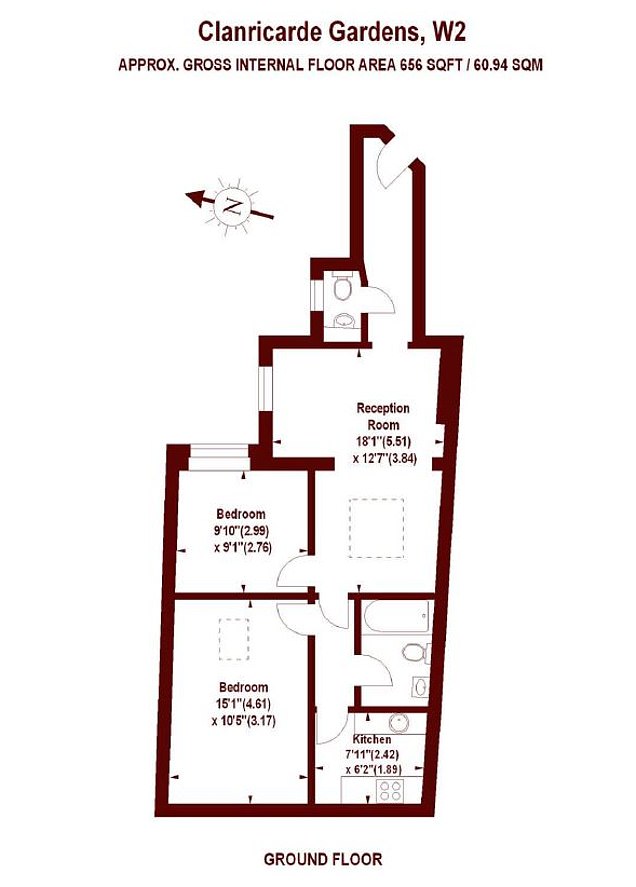 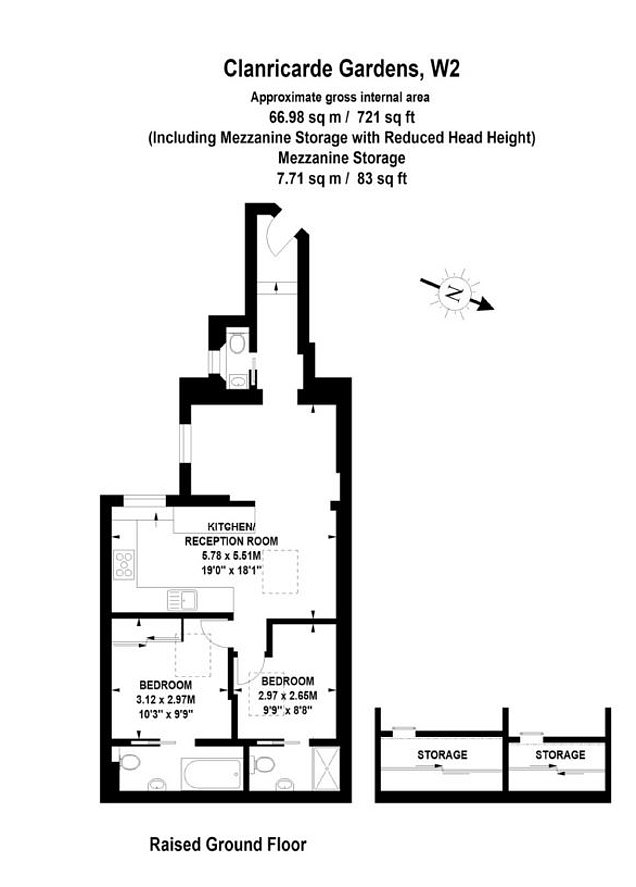 The before and after floor plans reveal how the flat has been rejigged, swapping the kitchen and bedroom’s location 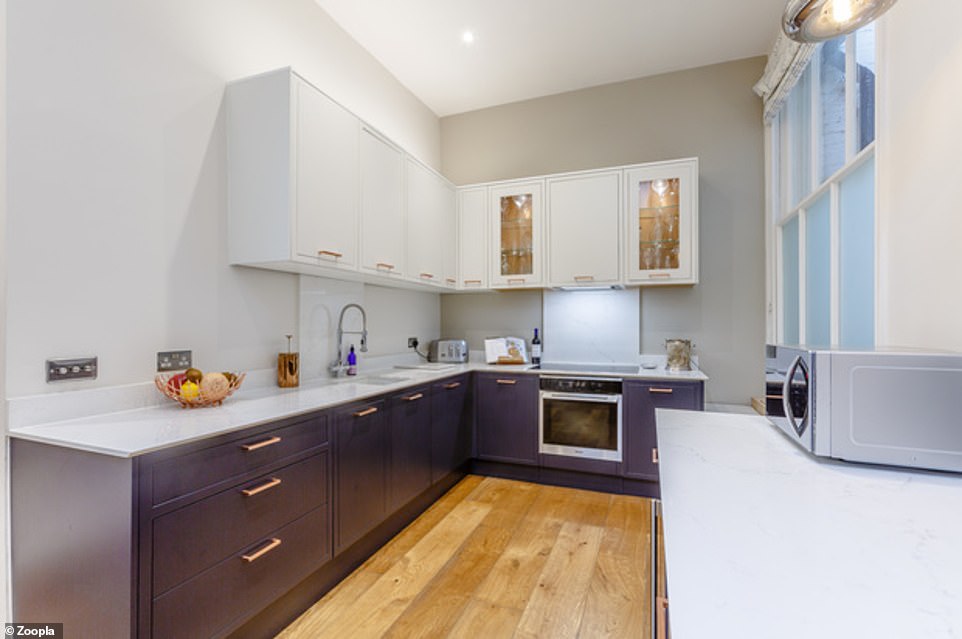 The new kitchen with two-tone cabinets, where there was previously a bedroom, makes better use of the space

The challenge was to replace a flat that was in a prime location but felt run-of-the-mill and awkwardly arranged, with something that worked much better.

Ben outlined how the kitchen had previously felt tiny and dark, and so he sought to open out the living space.

The floor plan was changed to introduce a kitchen leading to an open-plan living area and place both bedrooms to the back of the building. This saw one of the original bedrooms become the kitchen and vice-versa.

Both bedrooms then got en-suite bathrooms with mezzanine storage space added above them.

Ben explained: ‘The flat’s layout didn’t work, the kitchen was tiny and had no ventilation. There was one bathroom and a dark feeling in places.

‘The key was to use the tall ceilings and give an open-plan feel, making the most of the natural light in the flat.

‘And to twin that with creating a quiet, private living space in a raised ground floor flat in the centre of Notting Hill.’ 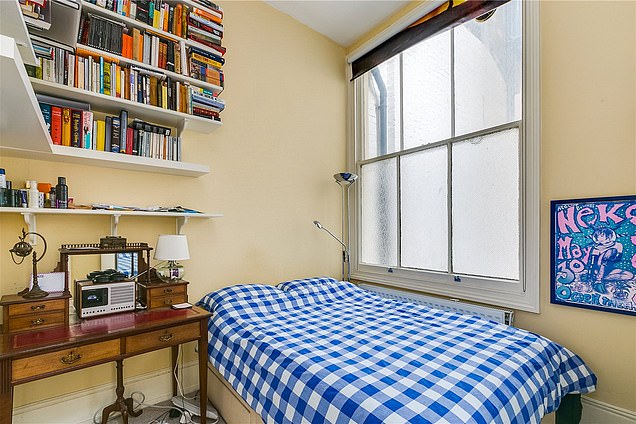 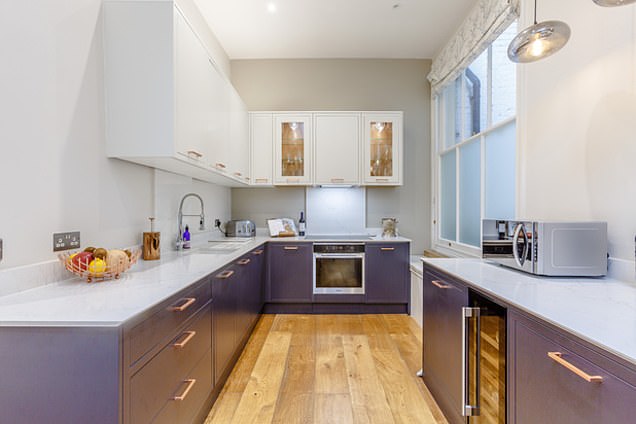 The same space transformed: The former bedroom now transformed into the contemporary kitchen 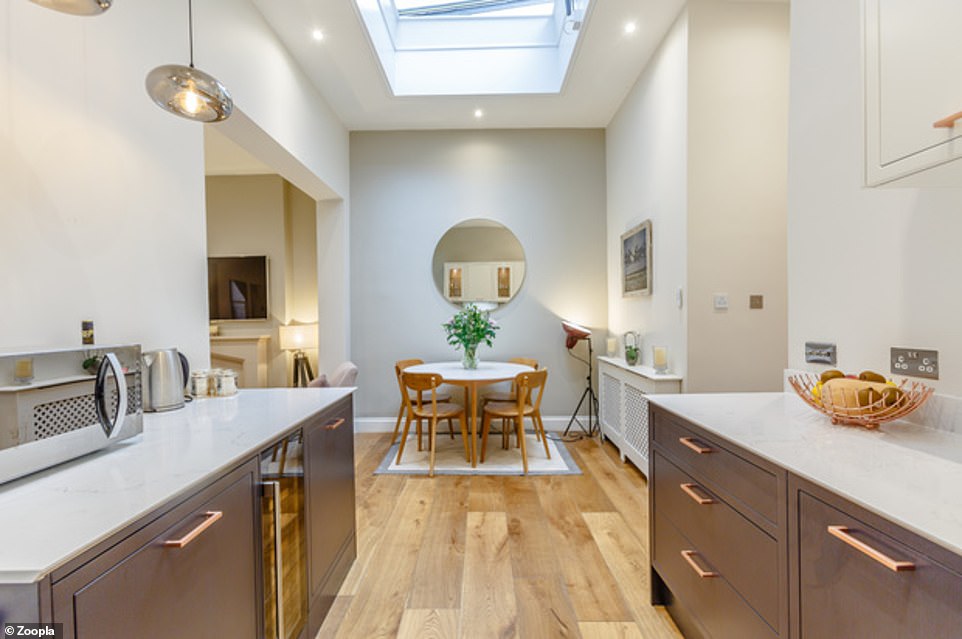 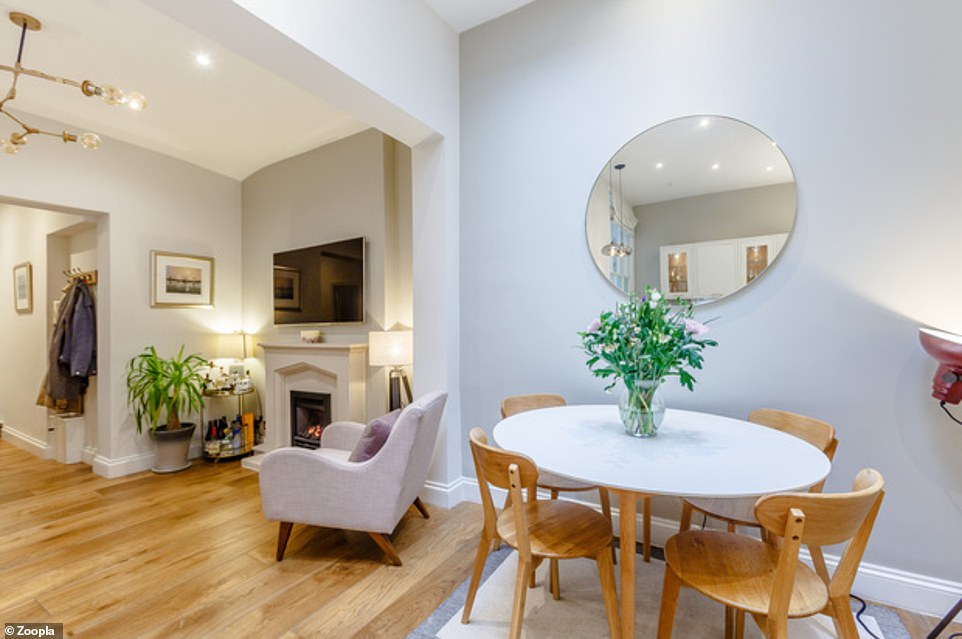 The unique light in the living area, top left, was designed and built by the current owner

A unique touch was added in the living room, with a light that Ben put together himself.

He explained: ‘I bought the basis of the light on the internet and it was meant to have small LED lights then bulb style bronze lamp shade.

‘I took off the shades and replaced the bulbs with the big round LED ones you see now. I prefer it how to how it was originally meant to look.’ 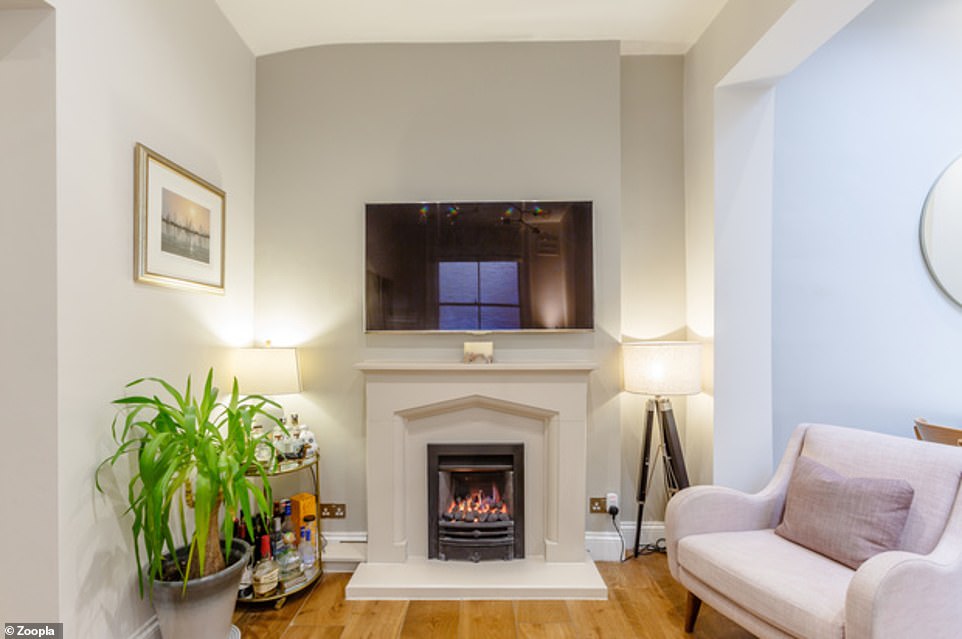 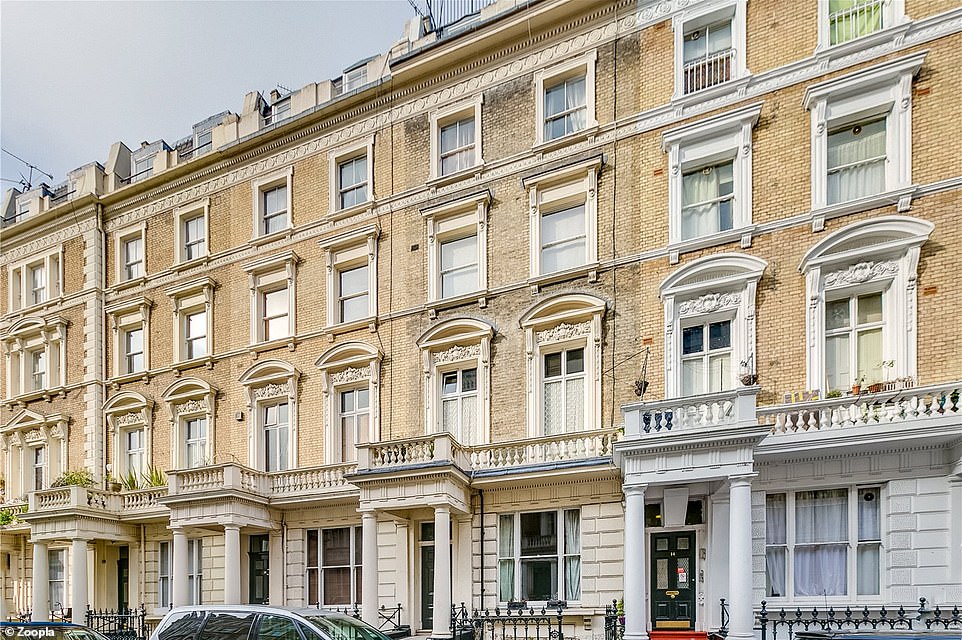 The two-bed flat is in London’s fashionable Notting Hill and is currently for sale for £900,000 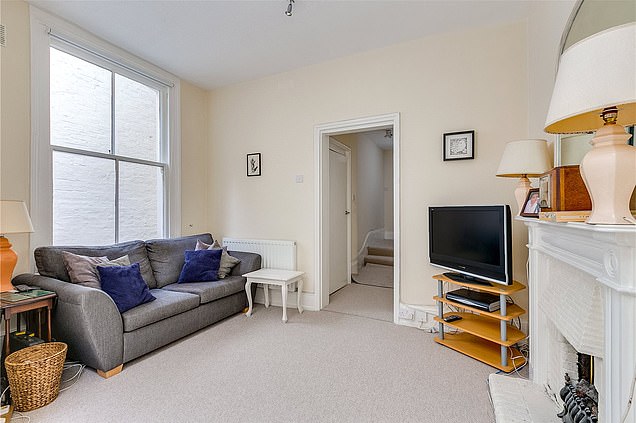 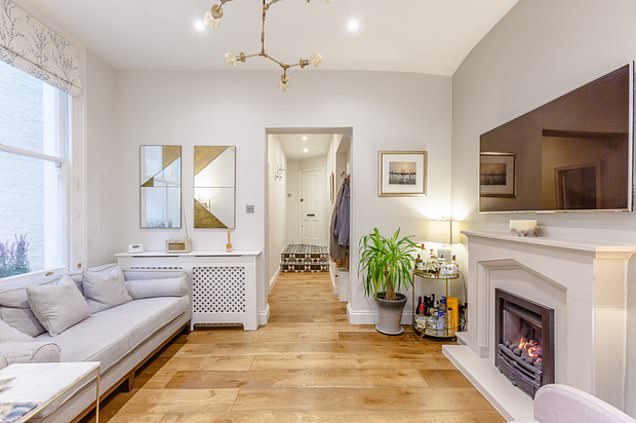 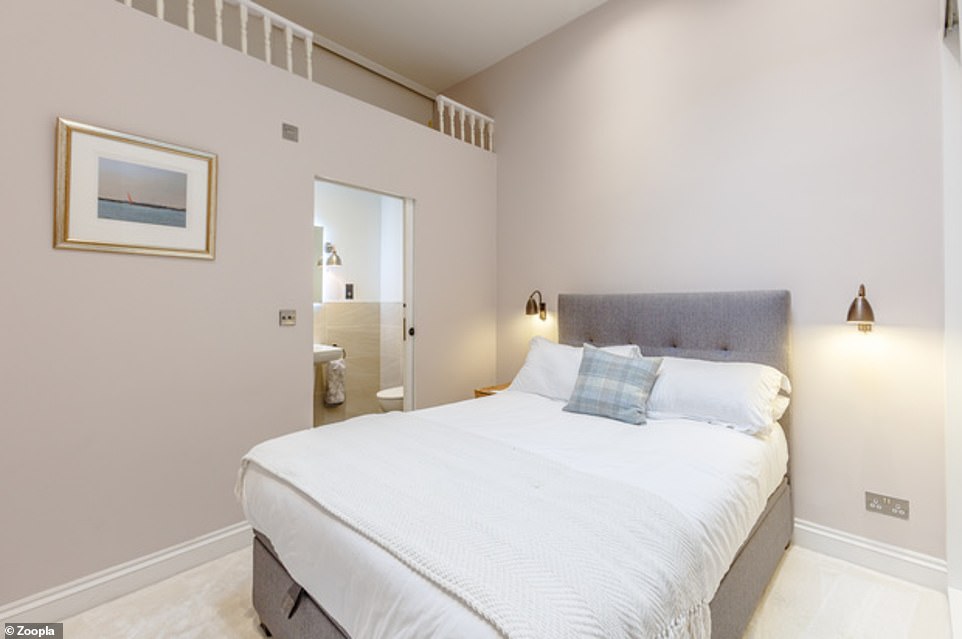 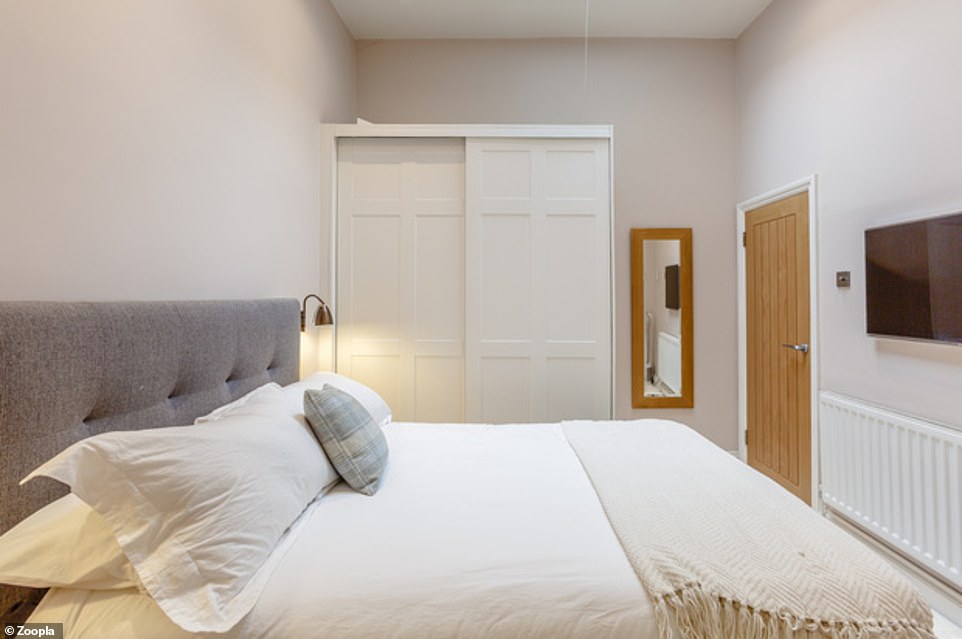 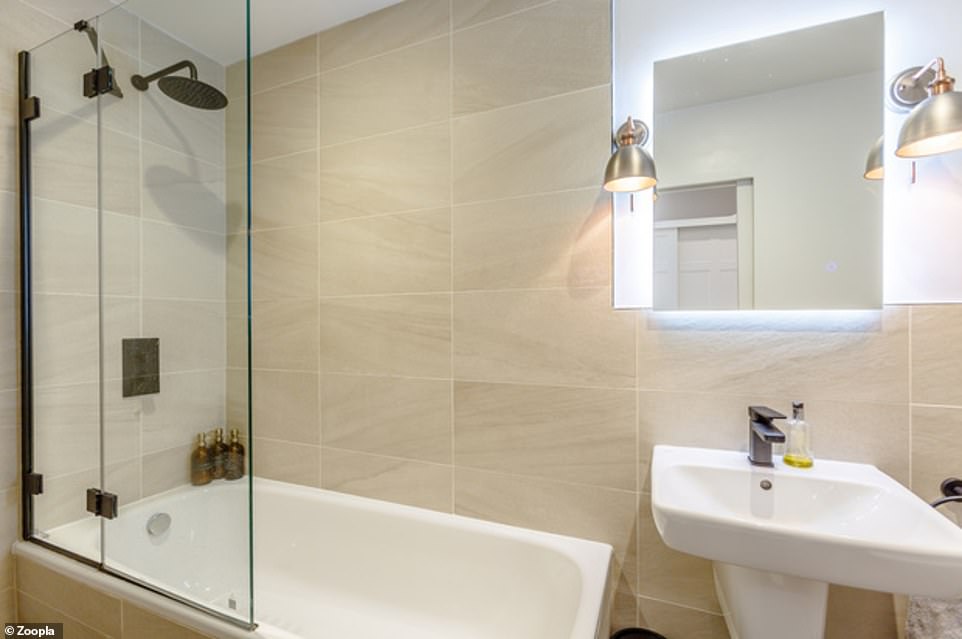 A contemporary feel: The new bathroom has unusual matt black fixtures and fittings

The finishing touch in transforming the flat was to decorate it in a way that turned it from bland to a more inspired contemporary look. Ben called on the interior design skills of Katy Jackson, of Jackson Interiors for this.

She picked out five paint colours, which are all from a company called Little Greene.

Katy said: ‘I feel it is important to use colour and personality in properties as conventional white or magnolia paint colours can be off-putting.’

She added: ‘All properties have a unique type of light and it is therefore important to be guided by this when selecting colours.

‘The colours I have chosen are to compliment the warm light in the space. I wanted to create a welcoming, warm and light atmosphere.

‘The subtle feature wall in the dining area helps to zone the space without encroaching on the open-plan feel, pulling your eye up to the large sky light.’

All of the paints are from Little Greene and this one is a warm off-white that was used for all the ceilings, woodwork and the second bedroom and ensuite walls.

This paint colour is a slightly darker and greyer version of the Slaked Lime 105 and was used in the entrance hall, living room and kitchen.

This is a darker shade of the Slaked Lime Mid and created a subtle contrast on the feature wall in the dining area.

This is a muted nude pink colour that added warmth and luxury to the master bedroom.

These colours added interest to the cloakroom at the property. 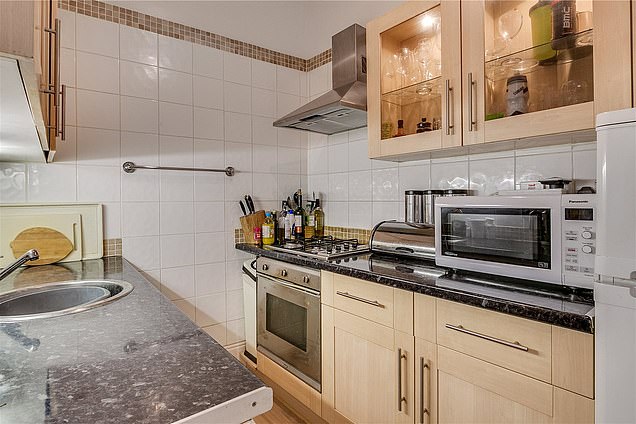 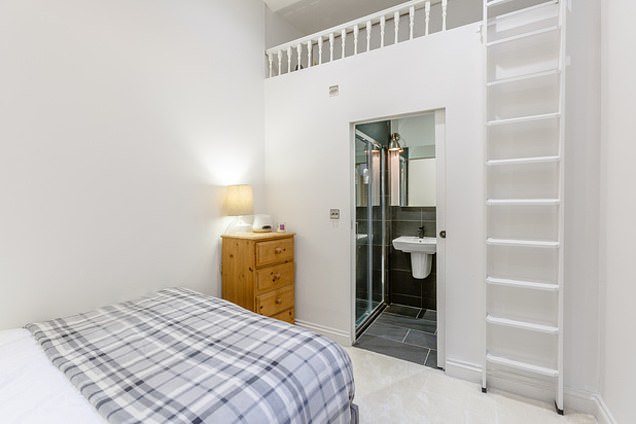 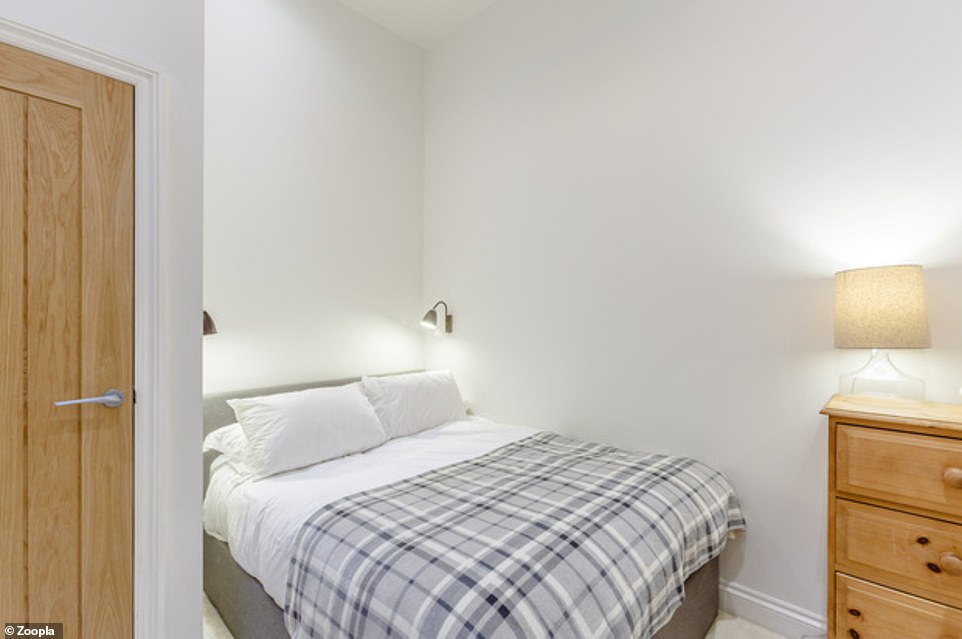 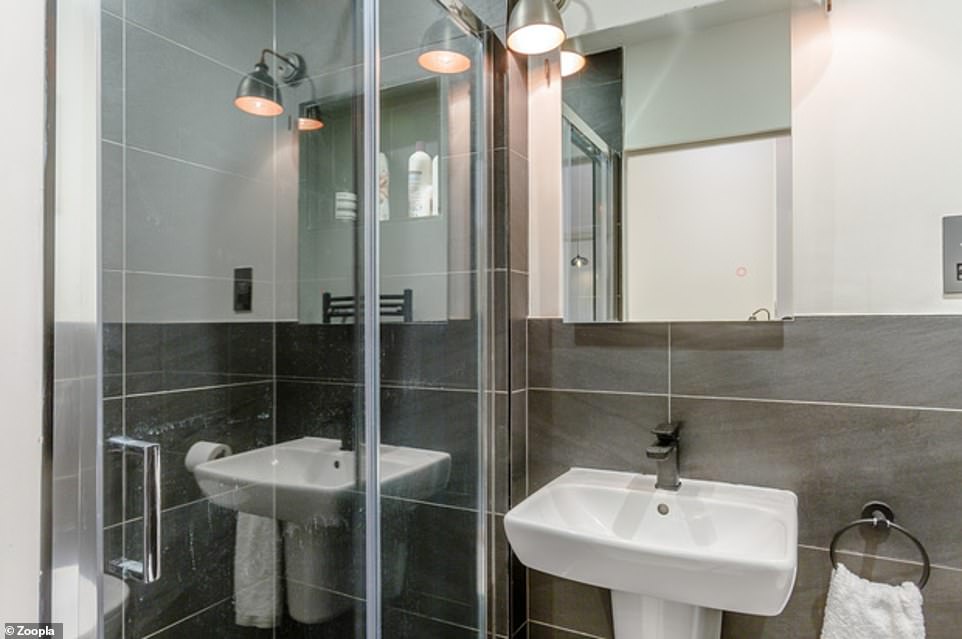 Clean and modern: The new shower room has no traces of the previous dated interiors 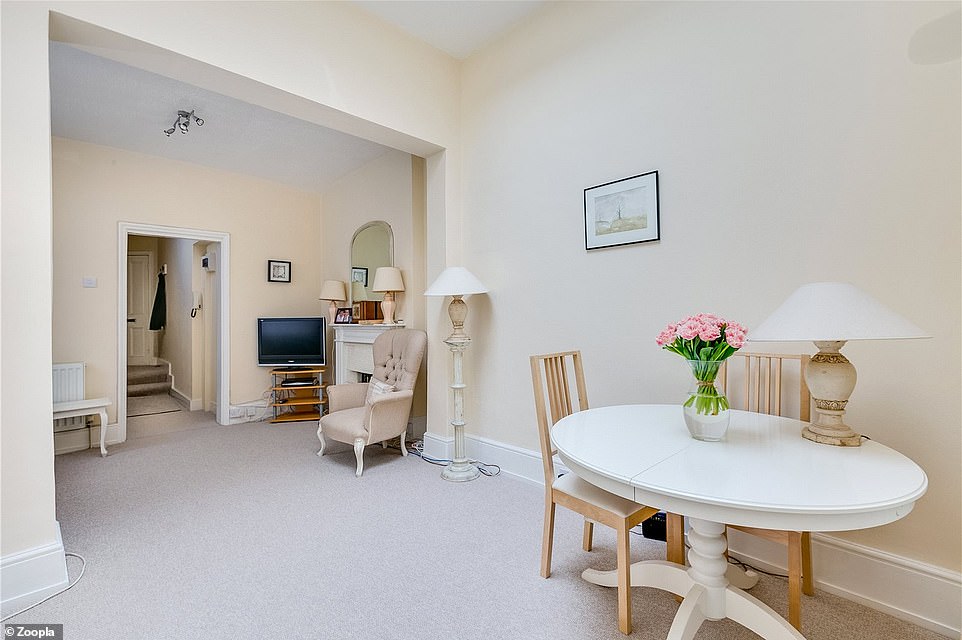 How it looked forward: The interior of the flat was previously bland and dated 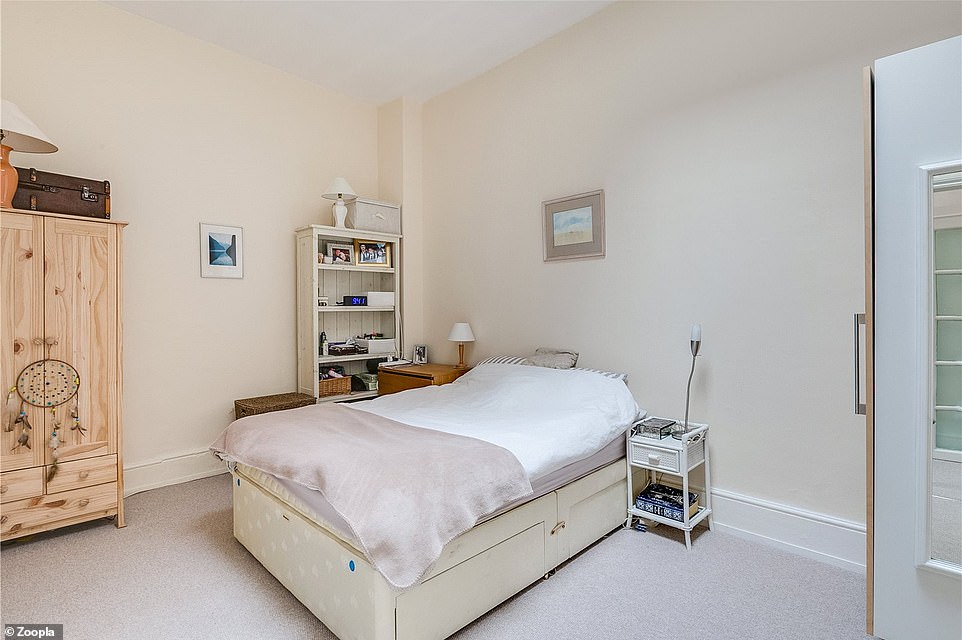 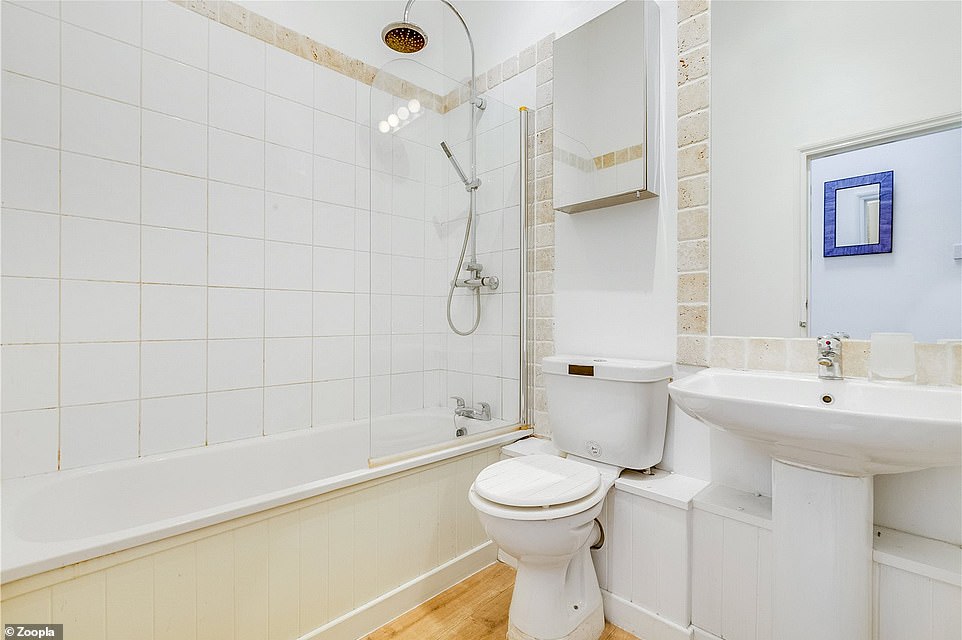 No more dated tiles! The former bathroom has been ripped out and replaced

Tue Apr 7 , 2020
Check out our updated review on a fantastic room design software company here. This company not only designs your space, but allows you to purchase the furniture and decor from your design. We hope you like the products we recommend. Just so you are aware, Freshome may collect a share of […]