From my living room on the fourth floor, I can see treetops swaying in the springtime breeze, and I can feel the warmth of the sunlight spilling onto my lap. The great outdoors and its surreal calmness (as if there isn’t a novel virus wreaking havoc across the globe) are […]

From my living room on the fourth floor, I can see treetops swaying in the springtime breeze, and I can feel the warmth of the sunlight spilling onto my lap. The great outdoors and its surreal calmness (as if there isn’t a novel virus wreaking havoc across the globe) are right on the other side of my window, and yet in the age of social distancing, the obstacles to get there seem immense.

For those of us in apartment buildings, every leg of the journey, from the apartment front door to the outside world, could increase our chances of catching the virus. The narrow hallways and small elevators could put us too close to our neighbors and their germs; door handles and buttons carry yet more risk.


If only I had one of those, I mutter as I look over to my neighbors’ balconies. I daydream about sunbathing on the lawn chair one neighbor’s got set up, or eating lunch at their bistro table, surrounded by a tiny but lush garden. Maybe I’d hang a hammock from the railing like I saw someone do the other day on an errand run. On my darkest days, I even delight in an uninviting weather forecast that could prevent the use of those balconies. Misery loves company, they say.

It’s admittedly a trivial desire relative to the gravity of the pandemic and the economic consequences, especially for those who don’t have a home at all. But it’s one that’s shared by many other cooped-up city dwellers. On social media, those who live in dimly lit spaces vow never again to settle for an apartment without a balcony. And many people sheltering with at least one other person are getting more desperate for an escape from the rising tensions indoors.


I will never live in an apartment without a balcony again. Ever.

Such yearning reflects the value and limited amount of private outdoor space — be it a patio, small yard, or even a fire escape — built into multi-family housing in dense cities, where any kind of personal space is a precious commodity.

“There are a lot of benefits to balconies from the perspective of livability, lovability, mental health, and the enjoyment of living in urban settings — even before the pandemic,” says Vancouver-based city-planning consultant Brent Toderian. For one thing, “they connect homes in higher-density cities to the streets and to the outdoors.”


As people are weeks into their city and state stay-at-home orders, that advantage has become apparent now more than ever. Balconies symbolize new kinds of freedom — to embrace social isolation without feeling trapped, and to enjoy fresh air without worrying about breathing in the virus.

Globally, billions of people are under lockdown, including 95% of the U.S. population as of early April. They’re staying indoors for days, even weeks, at a time — and many are doing so alone. Most shelter-in-place orders still allow people to engage in solo outdoor activities like walks and runs, and that exposure is sorely needed as health experts predict that prolonged social isolation could take a toll on mental health. But leaving home is now a double-edged sword.


Cities are changing fast. Keep up with the CityLab Daily newsletter.

The best way to follow issues you care about.

“Going outside is our only escape. But now that’s scary, too,” reads the headline of a recent Washington Post article. As governments opt to close parks and trails, people are cramming into narrow sidewalks within their neighborhoods. Some cities have closed streets to most cars to allow pedestrians and cyclists to spread out, but it can still be a challenge adhering to social distancing guidelines.

That means the once-casual activity of leaving your house now involves both physical preparation (Masks, check! Hand sanitizer, check!) and careful calculations (How wide is six feet, again?). Even then, you may go home anxiously wondering for days if the jogger who exhaled just a little too close to you may have gotten you sick. (Covid-19 symptoms can take up to 14 days to develop.)

“The most obvious things this pandemic has revealed in the little details of city living are sidewalk widths and balcony depth.”

But balconies are relatively scarce in many of the densest urban areas. Across the top 15 most populated metro areas, only 62% of renters have access to a “balcony, patio, deck, or a porch,” according to the 2017 American Housing Survey. In San Francisco, two-thirds of renters have such access, but those who spend more than half of their income on monthly rent make up just 20% of that group. And in New York City, those amenities are accessible to only a third of all renters — half of whom pay at least $1,500 in monthly rent.

Even then, not all balconies are big enough to actually be functional, Toderian argues. He says developers generally build them in three sizes. On the smaller end are Juliet “faux” balconies that are common in European cities but also found in North American apartments. They sit in front of windows, and are just big enough for one person to stand (perhaps looking for their own Romeo). On the other end are full-sized balconies that run roughly six feet deep and can comfortably fit tables and chairs, and maybe even a grill.

“And then there are the balconies in between that have space, but they almost seem for show,” he says. “They don’t have enough depth to put out a reasonable chair and sit on without putting your feet up on the railing.” In fact, these are not uncommon in Washington, D.C., where I live. A 2013 Washington Post article detailing the conundrum of decorating undersized balconies referred to them as a “D.C. real estate charm,” on which “nothing fits … not even the dreams you had for it.”

Small, impractical balconies are often the result of restrictive zoning laws, according to Toderian. In some cases, cities set maximum size limits for private outdoor spaces in multi-unit buildings. More commonly, cities don’t impose limits but have zoning laws that discourage developers from building bigger balconies. “Many cities have a maximum amount of space that developers can essentially get ‘for free’ for balconies,” he says. These laws allocate some amount of space that developers can use without being charged per square foot, or that doesn’t count toward the site’s maximum density, if there is one. Theoretically, this allows developers to build more useable balconies. The problem is, that free space can be quite small, which means there’s a trade-off for making a balcony any bigger than that.


“If you build bigger balconies, it means you would have to build less internal space, and almost no developer would be willing to make that trade,” says Toderian. “Hence you get small balconies.” Or none at all.

Some developers may offer, instead, common outdoor spaces that are larger and designed as gathering places for all building residents, like access to rooftops, terraces or courtyards. According to the National Apartment Associations, these are among the top amenity offerings that property owners added or upgraded over the past few years in a survey of several U.S. cities.

As Vancouver’s former chief planner, Toderian tweaked the city’s bylaws to incentivize bigger balconies when they could also serve other goals. Under the reformed rules, developers could expand the amount of exempted balcony space if they could show that their design improved three characteristics: the home’s livability, the building’s architectural interest, and the property’s green performance. On that last point, balconies can help lower energy use by providing “passive shade” that can naturally cool down homes. The result, he says, was better development proposals: “You didn’t have to hire a starchitect; you just needed to put some thought into it.”

As urban planners ponder how to adapt cities to the post-pandemic future, including reshaping streets and making them more resilient to disasters, there’s room for a discussion on improving building designs to make cities more livable.


“The two most obvious things that this pandemic has revealed in the little details of city living are sidewalk widths and balcony depth,” Toderian says.

Whereas cities and developers might have once only seen balconies as an amenity to raise market value, the pandemic has shown that they serve greater purposes.

Especially in neighborhoods where street-facing balconies are common, they’ve also become platforms for community resilience and social connection. As in many cities across the globe, some Vancouver residents engage in nightly cheering for health care workers from their balconies. Neighbors also sing and dance together, and entertain each other through makeshift art galleries, impromptu performances, and even workout sessions (which are especially beneficial for older adults). Even several stories into the air or across wide avenues once filled with cars, they can build connections with their neighbors from the safety of their own home. In Naples, Italy, they’ve brought back the old tradition of lowering “solidarity baskets” filled with food from their balcony to help feed fellow the homeless.

In heavily polluted cities, some balconies are also becoming pleasant living spaces for the first time, thanks to drops in air pollution in part from plummeting car traffic. India-based photographer and writer Shrikkanth Govindarajan recently wrote about his experience of hanging out on his sister’s balcony — a space that he said usually served as a drying rack for laundry before the pandemic — on the site Scroll.in:


In the last couple of weeks, though, stepping into the netted balcony has served as a brief escape from the tedium of quarantine. The amusement of seeing an empty road with deafening silence, only filled with sounds of chirping birds.

At least some of the changed uses of balconies may live on beyond just the next few months, raising the possibility that the demand for, and benefits of, balconies could only increase in the coming years.


“The question is, are we ready to rethink our old assumptions about whether balconies are a good idea or not,” says Toderian, “and how to do them well now that we’ve had this learned experience from being forced to stay home?”

Coronavirus Questions Answered: What We Know About COVID-19

Wed May 6 , 2020
One of the worst symptoms of any plague is uncertainty—who it will strike, when it will end, why it began. Merely understanding a pandemic does not stop it, but an informed public can help curb its impact and slow its spread. It can also provide a certain ease of mind […] 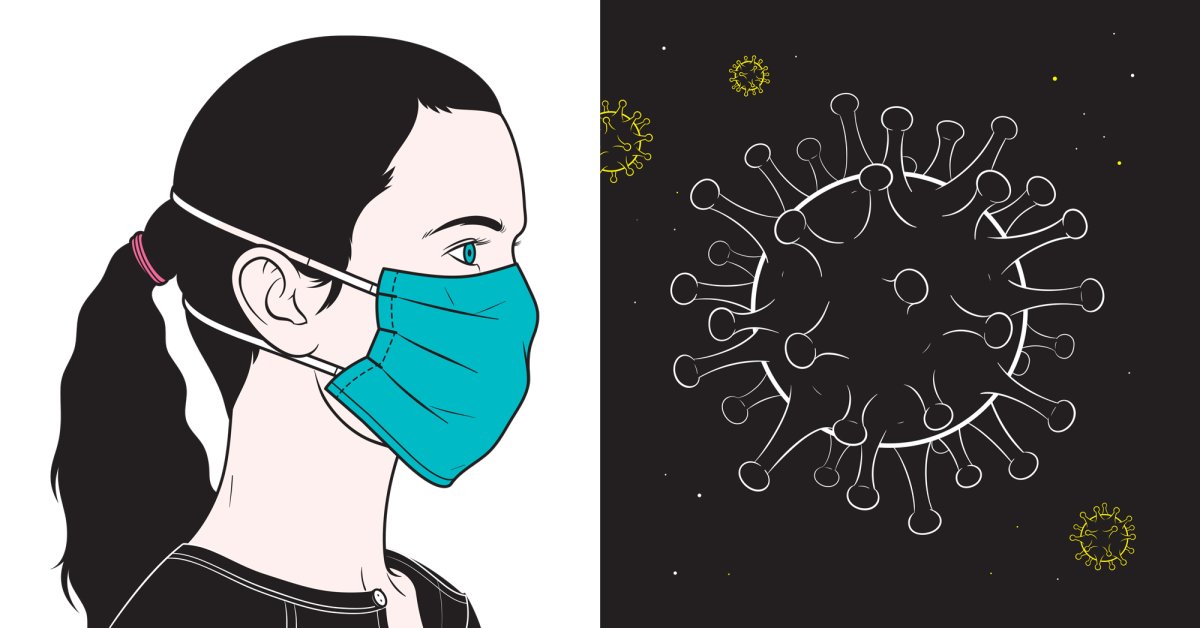