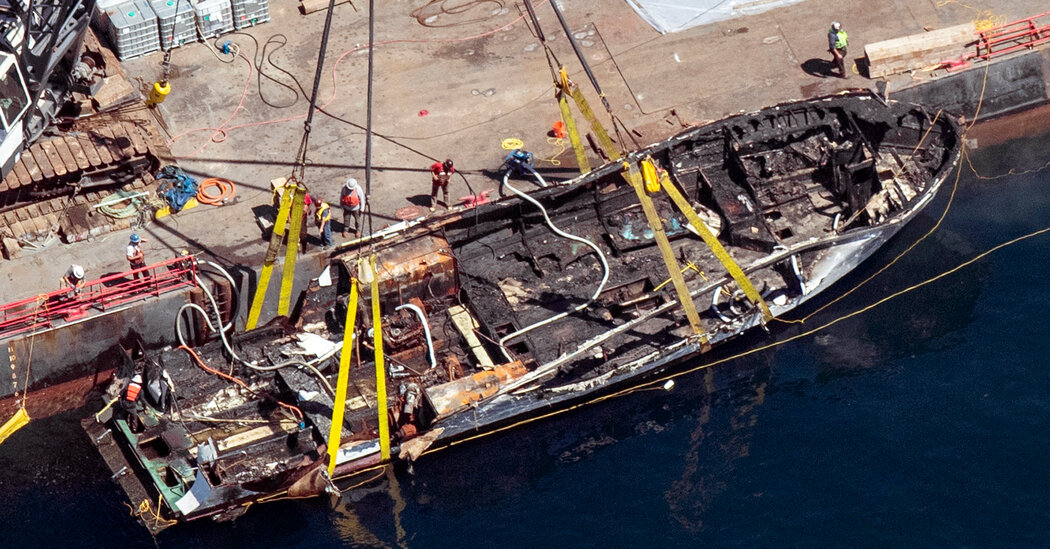 The lack of a required night patrol aboard a scuba dive boat delayed the response to a fire that killed 34 people last year, the National Transportation Safety Board said on Tuesday.

The delay allowed the fire to grow unnoticed and “directly led to the high number of fatalities,” the board said.

A lack of smoke detectors in the lounge where the fire most likely broke out, as well as escape hatches in the bunk rooms that directed escapees into the lounge, which was on fire, were also found to have contributed to the delay and extreme loss of life.

The fire, which began early on Labor Day 2019, overtook the 75-foot boat, named the Conception, off the coast of Santa Barbara, Calif., while its six crew members and 33 passengers were asleep.

Five crew members escaped the fire, jumping overboard and pleading for help from a nearby fishing boat. Some who tried unsuccessfully to escape were thought to have been awakened during the fire, as shoes were found on their bodies. All 33 passengers and one crew member died of smoke inhalation.

The boat’s captain, Jerry Boylan, told investigators that he was awakened by the crew and was able to make a call to the U.S. Coast Guard before jumping overboard.

The board’s five members — who convened via video conference — voted unanimously that the probable cause of the accident was the failure of the boat’s owner, Truth Aquatics Inc., to provide “effective oversight of its vessel and crew member operations, including requirements to ensure that a roving patrol was maintained.”

The specific cause of the fire itself could not be determined, though investigators said it could have been caused by unattended batteries that were charging, the ship’s electrical components or smoking materials. Efforts to find what had sparked the fire were stymied by the destruction caused by the fire and subsequent sinking of the ship.

“At the end of the day, there’s one person in charge of safety,” said Jennifer Homendy, an N.T.S.B. member. “That was the owner of these vessels and the owner of the company.”

Nine days after the fire, a federal grand jury issued a subpoena on a family trust run by Truth Aquatics Inc.’s owners, Glen Fritzler and Dana Jeanne Fritzler, seeking information about the company and the boat, according to court documents. Mr. and Ms. Fritzler filed three days after the fire to limit their liability in the accident, court records show.

On Tuesday, an employee of the company referred a request for comment to Mr. Fritzler. Lawyers for Mr. and Ms. Fritzler did not immediately respond to phone calls and emailed requests for comment.

Federal prosecutors spoke with Mr. Boylan, the boat’s captain, in July to inform him of potential criminal charges, according to court documents. The type of meeting between Mr. Boylan and prosecutors is often used to persuade defendants to plead guilty.

Criminal charges against Mr. Boylan were “imminent or will soon be forthcoming,” lawyers for Mr. and Ms. Fritzler said in a report filed in August, though there was no indication on Tuesday that charges had been filed.

Calls and emails to Mr. Boylan and his lawyer on Tuesday were not immediately returned.

The N.T.S.B. recommended on Tuesday that the Coast Guard require smoke detectors in all passenger areas aboard vessels; smoke detectors were required in the sleeping quarters but not in the lounge.

The board also said that escape hatches should be required to lead to separate spaces in the event that a single fire blocks the singular exit fed by multiple hatches, as was the case on the Conception.

It also urged the Coast Guard to begin an inspection program “to verify that roving patrols are conducted — as required — for the safety of sleeping passengers and crew.”

The Conception had passed all of its inspections by the Coast Guard, the board’s chairman, Robert L. Sumwalt, said, “but that did not make it safe.”

A spokeswoman for the Coast Guard, Brittany Panetta, said in an emailed statement on Tuesday that the Coast Guard would consider the recommendations “through a deliberate process, which will include review by all subject matter experts and senior leaders responsible for implementing the potential regulatory changes.”