Some design jobs are simply impossible, and directly replacing the 67-year-old Land Rover Defender with a modern vehicle is one such example. The basic Land Rover is a legend, the strongest remnant of a company no longer extant, having been caught up in the integration and annihilation of the entire […]

Some design jobs are simply impossible, and directly replacing the 67-year-old Land Rover Defender with a modern vehicle is one such example.

The basic Land Rover is a legend, the strongest remnant of a company no longer extant, having been caught up in the integration and annihilation of the entire British motor industry. In 1885 Rover essentially invented the modern bicycle with equal-size wheels front and rear, the Rover Safety Bicycle. The company moved to motorcycles in the late 1900s and to cars in 1904.

Known for quality, Rover was the first firm to make a gas turbine car, and with the 1970 Range Rover the company invented today’s luxury SUV. Rover was eventually sold piecemeal to BMW and Ford, then passed on to Asian owners—cars to China’s SIAC, utility vehicles to India’s Tata—and Rover itself is no more. Land Rover remains based in the U.K. and retains its experienced product-creation staff, though the new Defender is made in Slovakia, not Solihull.

Saying the original Land Rover—essentially a surplus Willys jeep chassis with a Rover sedan engine and a no-compound-curve sheet aluminum body—was on the rustic side is extreme understatement. But as it evolved, it proved to be extraordinarily effective, its very rusticity a virtue. Easy to drive, simple to field-repair with minimal equipment, and nearly indestructible, it was almost unreasonably capable. It became much loved by owners everywhere, most particularly in nations once part of the British Empire, yet production stopped in 2015. However strong demand, there was no way to keep making something that did not and could not comply with
modern legislation.

So the new Defender can’t be maintained with a few adjustable wrenches, is crammed to the gills with elaborate electronics, doesn’t pollute beyond today’s low allowable limits, and has crashworthiness its progenitor lacked. Independent suspension replaces beam axles on all wheels, the separate chassis is gone, and its elegant styling is completely opposed to the original’s attractive crudity.

It’s now a modern vehicle in every way, including its high price and weight brought on by government-imposed specifications. It can perform most tasks the first ones could, but it’s also luxury transport, as much at home at a country club as any limousine. Many “Landy” enthusiasts find it entirely too sophisticated and dream of the departed simplicity, but I think the mechanical and aesthetic design teams have done quite well with this new version.

The new model retains a lot of the visual feel of the last classic Defender’s front end, with what amounts to a big square in the middle of the nose, yet open areas are minimal, unlike an Audi or Lexus maw. Plan-view chamfering and soft rounding at the top give aerodynamic advantage. An inserted section of simulated diamond plating lets you think you could stand on the fenders—you can’t; it’s flimsy plastic for pedestrian safety. If the vehicle strikes a person, his or her head would impact a section 100mm above anything rigid. So it’s good design functionally and stylistically, and it plays into the rugged image. Which is, and is not, truly real in this exceptional vehicle.

1. Overhead skylights in the rear compartment are evidently standard, but the glass roof is an option, as seen here on the shorter model.
2. The quite rounded roof has an absolutely straight baseline on the sides and around the top of the windshield.
3. It’s hard to understand paying extra for this optional panel that obstructs some of the driver’s precious vision, but apparently it’s expected to sell well.
4. These dark diamond deck plate simulations are plastic panels inserted for European pedestrian safety requirements and are decorative in their own right.
5. Perforated wings alongside the bumper bar add visual interest and complete the frontal composition nicely.
6. Don’t pay any attention to the license plate number. It was moved from one car to the other.
7. This truncated-circle headlamps trick has been applied to a lot of other cars; it works nicely every time.

1. There is a huge panoply of 18-, 19-, 20-, and 22-inch wheels for the Defender. All of them we’ve seen so far are quite attractive, but these are particularly nice.
2. This flush fuel-filler door is a glaring design error, in my view. An apparent round cap could still be flush.
3. The spare tire is mounted on the tailgate to assure the best possible departure angle. It might also bash a lot of other cars’ hoods, unfortunately.
4. The rear overhead skylights are identical pieces on both long and short (and longer still to come) Defender models.
5. Pay attention to this straight line, and you won’t notice that the centerline profile is an elegantly aerodynamic tapering form. Nice sleight of hand.
6. This black plastic grille is legitimate; the engine’s air cleaner breathes through it. (See also front 3/4 view. )
7. The “dog house” on the hood adds a bit of (artificial) visual ruggedness.
8. A nice conceit, this little indent in the black trim has appeared on other Land Rover products to good effect, however unnecessary.
9. Notice the profile is surprisingly aerodynamic for what is meant to be a blunt, upright vehicle. Again, very clever detail design.

1. Additionally, there is a little slot at the bottom.
2. Simple quarter-round holes beneath the bumper wings allow more air to flow through the body.
3. The lamp in bumper wings gives rise to a four-lamps-per-corner design theme that repeats on the rear end.
4. There is actually a nice crown to the top of the windshield, though it gives the impression that it’s straight across between the sides. Subtle design gives the impression of the Defender being as square-cut at the original. It’s not.
5. The badge is asymmetrically placed on a bar that almost completely obstructs the opening behind it.
6. Tiny stacked lamps espouse the form of the headlamps but are squared outboard, establishing a theme repeated on the rear end.
7. These lamps evoke, but in no way repeat, those of the original Land Rover.
8. There is plenty of texture on the nose. The central grille is egg-crated, the wings are perforated with small holes and a lamp opening, and the lower part has slightly bigger round holes.

1. All Defender rear doors are hinged on the right side, where structure is reinforced. This handsome handle makes it clear.
2. This notch in the separation between roof panel and backlight provides slightly better rearward vision and some visual interest.
3. All Defenders will have an external spare wheel, whatever the rim size.
4. Notice the “four squares” theme on both sides of the rear, two lamps and two reflectors on each.
5. Plus, there is a horizontal reflector alongside the nicely top-beveled bumper.
6. A very sharp break between the side panel and the tail is not 90 degrees, as you are meant to think, but actually a much more open angle.

1. It’s possible to fit a (seriously uncomfortable) useful third seat in the center where we see an armrest.
2. Inner door panels are simply mechanically fastened in place, with the Allen-head screws left visible. It fits the theme of toughness and looks good.
3. The steering wheel spider is cast magnesium, not covered except by paint.
4. The sole-specification automatic gearbox shifter is as annoying as British electrical outlets: You can’t move it without tripping a trigger on the back.
5. The digital screen is well placed and big enough to be useful, and it fits well into…
6. …This massive but light and strong cross-cowl beam, itself…
7. …Capped by this massive magnesium casting that Land Rover people insist is “strong enough to let you push the car with it.” How one person can push a 5,000-pound-plus car from outside was not explained. Nice shape, though, and all of it nicely finished, with soft trim on the beam.
8. Even the wooden trim pieces are affixed with visible fasteners.

1. The center front is as blunt as anything on the road, and in front view, square.
2. This slightly raised “dog house” on the hood stiffens the panel and provides visual reassurance that this Defender is still tough.
3. Outboard of the center square, the corners are pared back for better airflow and reduced turbulence.
4. Visual trickery, yes, but also a positive safety feature, these panels are not textured deck plate but instead relatively flexible plastic. |
5. You can see the sides are actually a bit voluptuous, even if they are made to look a lot like the flat 1948 Land Rovers.
6. Overhead windows in back are a pleasant feature included on every car.
7. Rear corners are sharp for clean airflow separation, but they’re not simply 90-degree bends.
8. Notice how the roof tapers inward to the rear quite a lot, to reduce drag.

Design Guide for the Home Office

Sat Apr 25 , 2020
[All images by BUILD LLC] In the midst of our new stay-at-home, shelter-in-place reality, it’s no exaggeration to say that the home office has never been more important. We’re writing this blog post from a home office, and many of you are likely reading these words from a home office. […] 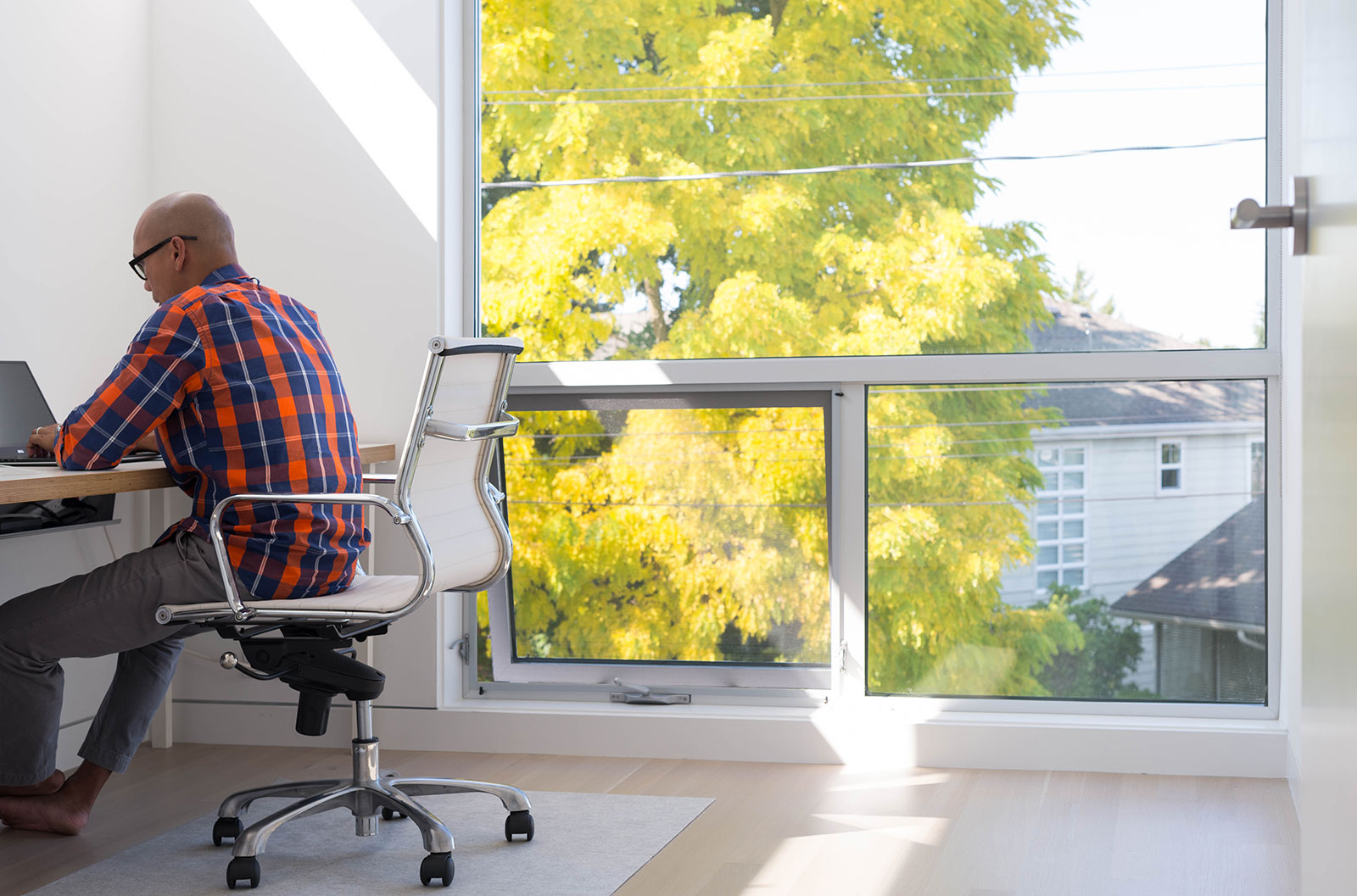