Lily James as Daphne in Rebecca Kerry Brown/NETFLIX In Daphne du Maurier’s 1938 novel Rebecca, the house of Manderley makes for an imposing structure. The stately British home, located in Cornwall and long owned by the de Winter family, becomes almost a character in itself in the Gothic novel, which […] 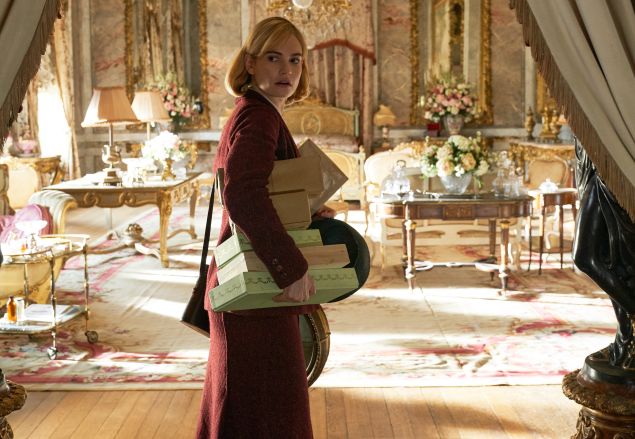 In Daphne du Maurier’s 1938 novel Rebecca, the house of Manderley makes for an imposing structure. The stately British home, located in Cornwall and long owned by the de Winter family, becomes almost a character in itself in the Gothic novel, which centers on a second wife who arrives at her husband’s home to find herself overshadowed by his dead wife Rebecca. Recreating Manderley for Ben Wheatley’s new adaptation of Rebecca, which is now on Netflix, fell to Sarah Greenwood, the Oscar-nominated production designer behind Darkest House and Atonement.

“The idea was that Ben would do what he does with his filmmaking, and then we would do what we do with our style of filmmaking,” Greenwood explains of coming onboard the film with Wheatley, who is an unusual choice for a period piece. “[The producer] loved the idea of putting us together, almost like a clash of cultures in a weird kind of way. What appealed to me about the project was that we would do everything as pitch perfect as it should be, and then Ben would come in and use the rooms as he does. It was looking at the period in a different way.”

To craft Manderley, Wheatley and Greenwood ultimately decided that instead of finding one location they would use numerous historic homes around the U.K. to build the fictional estate. Cranborne Manor, in Dorset, became Manderley’s exterior, while Hatfield House, Mapperton House and Loseley House are among the locations that make up its interior. In total, Greenwood used eight different estates to build her version of Manderley.

“We were always told by the producers that it was too many,” she says, laughing. “But it’s a massive character in the film and you have to see her in so many ways, you know? What I really love about English country houses is that they might have a Jacobian front and a Tudor middle and 1900s back and 1930s basement—they are a real amalgam of what different generations have done to it and adapted. Some has been changed and some has been maintained. Max de Winter feels the pressure of this house weighing on him so heavily.” 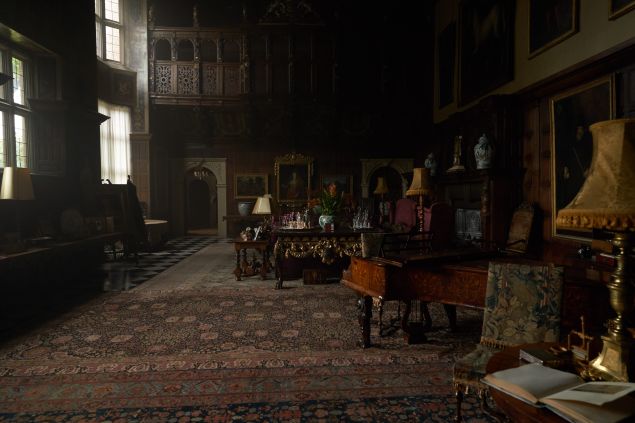 Only a few of the rooms were built as sets in a warehouse in Wembley, including the wing where Rebecca once lived. The new Mrs. de Winter, played by Lily James, soon discovers that Rebecca’s quarters have been carefully preserved by the housekeeper Mrs. Danvers (Kristin Scott Thomas) and Greenwood wanted there to be a strong distinction between Rebecca’s fashionable Art Deco bedroom and Mrs. de Winter’s heavy chambers.

“It was this idea of making her feel very uncomfortable in the house,” Greenwood notes. “The contrast between what Rebecca did to her wing and was maintained by Danvers, and what her bedroom looked like. Their new bedroom has an almost suburban feel. It’s very dark and heavy. When she walks in it’s a disappointment. It’s not what she had been expecting. There was a lot of push and pull in the house.” 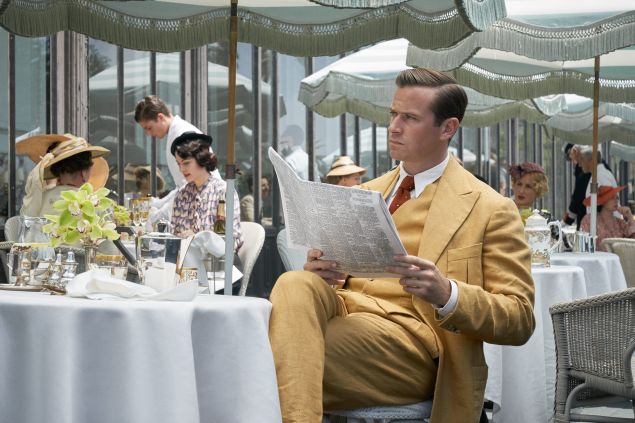 Although the character of Rebecca is long dead by the time Mrs. de Winter arrives at the house with her new husband, Max (Armie Hammer), Greenwood wanted Rebecca’s presence to always be felt. There are touches of her personality throughout Manderley, many of which the new Mrs. de Winter discover as she wanders the corridors and digs through the rooms. It’s jarring, both for the innocent, unnamed protagonist and for the viewer.

“Ben felt that he wanted her, when she arrives at Manderley, to be contemporary tourist, somebody going around a stately where they’re not used to this role she’s stepped into,” Greenwood explains. “She’s just blinded by it and well out of her depth. There’s nothing about it that she understands. It’s a bit like Alice down the hole. Every which way she turns it’s more and more unsettling and uncomfortable. She ultimately ends up in the West Wing, which is totally Rebecca’s world. It’s absolutely alien to her. She doesn’t understand it. That’s what we were after.” 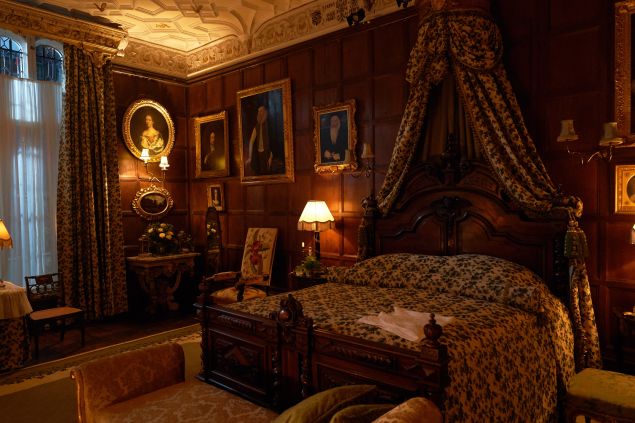 She adds, “The biggest creative challenge was finding the character of Manderley and all the layers in the house, and then finding the character of Rebecca within Manderley. She’s the biggest character. How she lived in Manderley was enormously influential. So you’re dealing with a dead person, whom you never see, and it’s trying to capture this person who loved fashion so much and who created part of this world.”

In the novel, Manderley can be found in Cornwall, but the team ultimately decided against filming any of Rebecca in its real-life location. Greenwood visited the area twice and in the end, Devon’s Hartland Quay felt like a more apt setting for the cliffs and stormy seas outside Manderley’s walls.

“Those cliffs were amazing,” Greenwood says. “They were angst-ridden and angry. Ben and I thought they suit the film better than the beautiful coves in Cornwall, which have got yellow sand and they’re absolutely charming. But also Cornwall has been shot a lot, particularly in Poldark, and truth be told and I don’t know that they would have appreciated much more shooting. There might be some tourists who say ‘Where is this in Cornwall?’ But I think Hartland Quay was better for our version of this film because it had a real aggressive and harsh look, even on a summer’s day. It fit our story.” 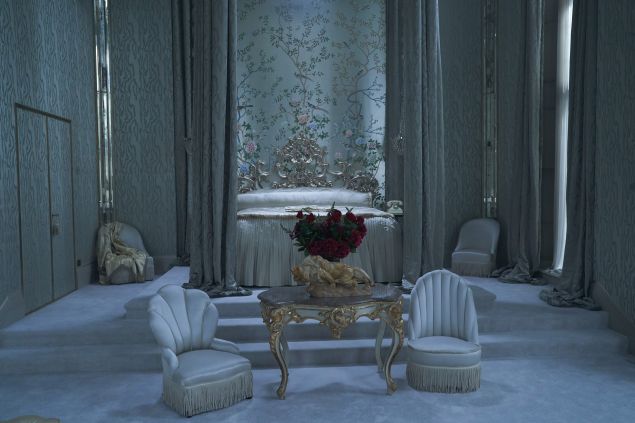 Beyond the U.K., the production also traveled to the south of France and shot the film’s early scenes, when the protagonist first meets Max, around Cannes and Antibes last summer. They visited the Exotic Gardens in Monte Carlo, and used the Hotel Regina, an opulent apartment building (and former hotel) in Nice as the hotel where Max is vacationing. “We came and we brought it back to life,” Greenwood says. “It was beautiful to capture. And to capture the mood and the atmosphere of Southern France.”

In the end, of course, Manderley doesn’t survive, which meant that Wheatley had to burn the house down for the movie’s climactic scene. Greenwood’s team built a fake exterior in front of Cranbourne Manor’s actual exterior, and the filmmakers set the façade on fire.

“We built a set piece in front of the real house and burned it with special effects, which was augmented by CGI,” Greenwood notes. “It was amazing that they allowed us to do that. And of course it was totally safe—we would never have done it if it weren’t. It was quite old-fashioned filmmaking in many ways, with real locations and very few sets.” 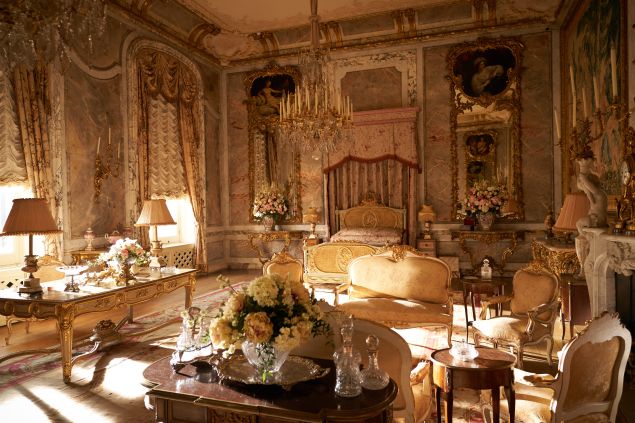 Greenwood, who is currently in Italy filming Joe Wright’s upcoming adaptation of Cyrano de Bergerac with Peter Dinklage, says it was a challenge to use so many real-world locations, but feels it ultimately paid off. And it’s an homage to a classic story she’s revered for a long time.

“I love the original film and the original book,” she says. “I’ve always loved the book. And all the other versions, like the BBC version, which was very interesting. It was a lot of work, but it was a real treat running around the country creating this jigsaw and seeing how it fit together. And I think it does, having seen the film. It was great fun.”

Rebecca is streaming on Netflix now. 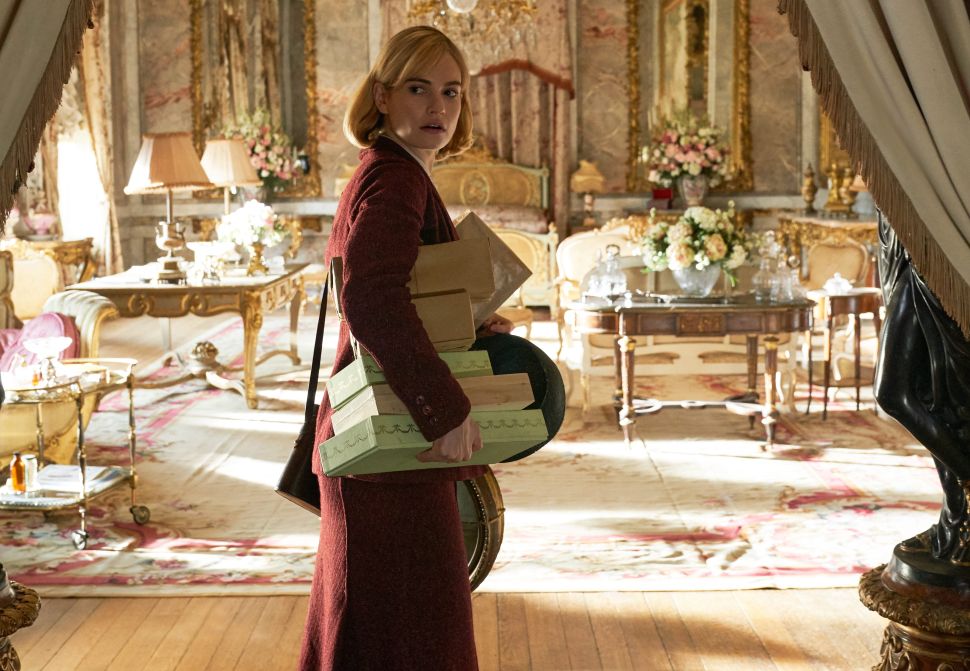 Mon Oct 26 , 2020
With a striking new debut, Toyota is breaking the sameness barrier in the midsize two-row crossover utility vehicle (CUV) category. The all-new 2021 Venza delivers an intuitive driving experience with smooth acceleration, predictable handling, and low noise, vibration, and harshness (NVH), all wrapped in a sophisticated design. The all-new 2021 […] 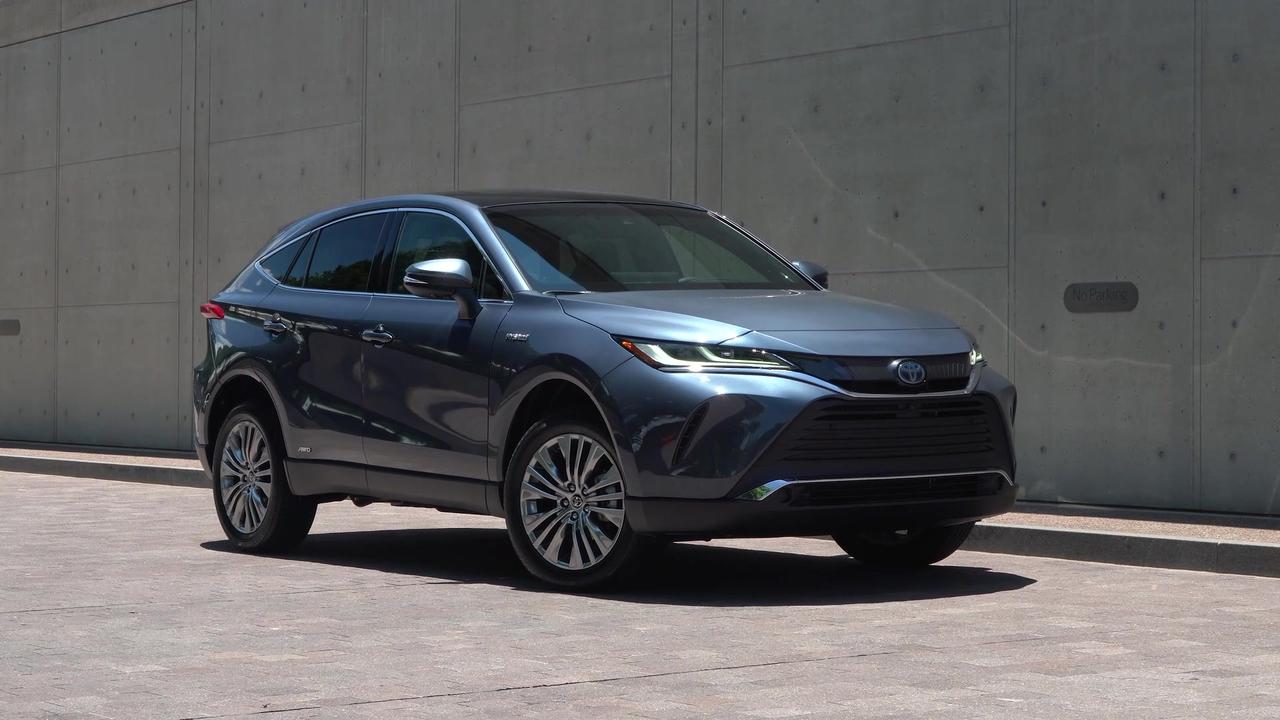