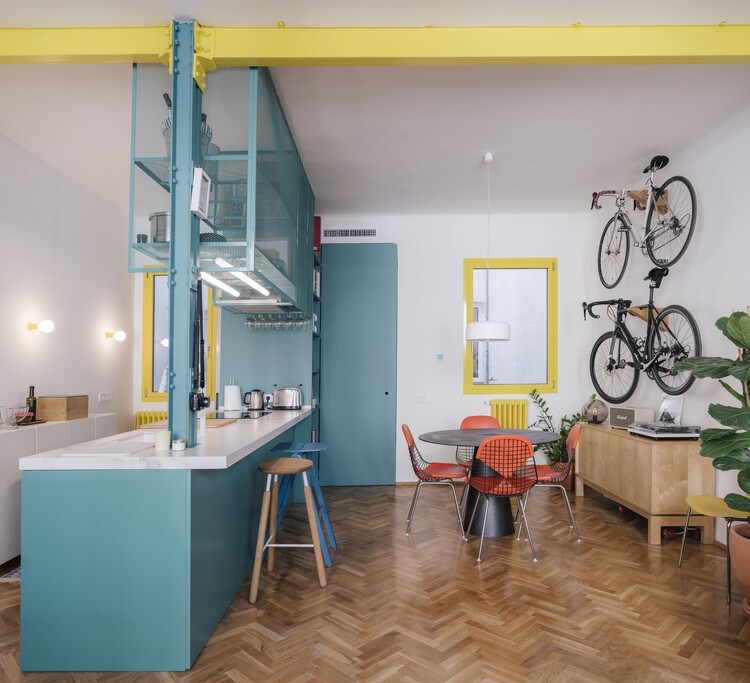 Text description provided by the architects. Carlota and Alejandro wanted colour. They wanted a cheerful apartment. The apartment they had bought was totally fragmented in small dark rooms and basically looked very grey. Carlota works in fashion, she has a lot of clothes and accessories to store seasonally. Alejandro is more a books and vinyl fun. They did not want to share a single bathroom, but they did want a common work area. Kenzo the dog liked parquet.

With their desires and needs clear, we were faced with the characteristic geometry of a dull building in the center of Madrid: “corridor flat” with two windows facing the street, divided in two by two small patios. The perimeter itself already defined two differentiated areas: a larger one facing the street and a smaller one opened to the courtyards.

We decided to push the idea of ​​longitudinal space by solving the entire project with a single element: a magical wall. This wall stores clothes, books, pots and appliances; hides a toilet cabin while invites you to use its large sink; it also cooks, refrigerates and may offer you a wine if you have a bad or good day. Plus, it distributes all the other spaces in the house. It had to be magical.

We brought colour in. We combined the green of the central element of the project with yellow new windows, existing radiators and bathroom tiles. We played with the lights and shadows generated by the opacity of the DM and the transparency of the lacquered aluminium deployé. Elevated sleeping areas shape a quiet and private blue space. These platforms are also additional storage space. The permeability of the private area is changeable and is configured by means of a large silver curtain capable of covering from the window to the dressing room.

Carlota and Alejandro enjoy now in their small apartment a large living space they can share with friends, a bright working area, a galactic sleeping space and an XL dressing room. They haven’t been able to exhaust the storage room in the magic wall yet.

Sat Dec 17 , 2022
Creating a seamless transition between the indoors and outdoors can be quite a challenge. With the right furniture, however, this task can suddenly become effortless! In this article, you will find some stylish ways to merge outdoor and indoor furniture to create a unified feel that is perfect for any […]